A dry window continues over the state as we kick off a new week. The remains of Florence are working through the southeast and turning north. This will be a move that brings a little bit of moisture into Ohio, but nothing of major consequence to Indiana. We likely see some offshoot clouds Monday and Tuesday in far south and southeast areas, but nothing that impedes progress. Most of this week will be dry.

A strong front moving out the northern plains into the upper Midwest looks very impressive to start next week…however, by the time it gets here on Wednesday, we are looking at nearly nothing left…we can see clouds and perhaps a few hundredths to a tenth or two over only 30% of the state. We are back to dry weather for Thursday and Friday. 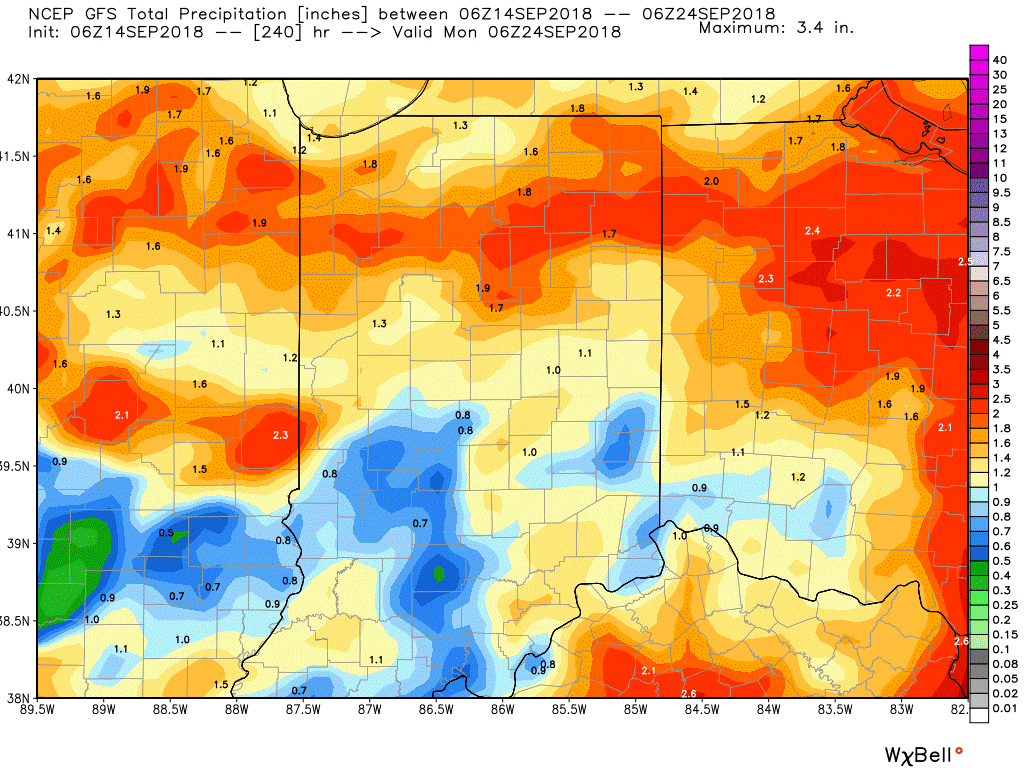 A stronger, more organized frontal boundary moves in for overnight next Friday night into early Saturday. Rain totals can be up to 1.25” but will only be that high where there are thunderstorms. AT this point, we think the best threat of that will be in northern Indiana. The rest of the state just sees scattered showers, and the moisture falls apart Saturday morning as the front moves south and east. Coverage will be at 60% or less. The map at right shows combined rain potential, including the midweek event and the stronger late week event.

Temps will be easily well above normal for the weekend and the first half of next week. The second half we have temps back closer to normal, and then for the extended period, we expect a move to normal and below normal levels, just in time to flip the calendar to October.

We have another front around the 25th as we kick off the extended forecast window. That front looks very similar to what we have as we finish the 10-day period out next weekend. However, the bigger story likely is the cooler, drier Canadian high pressure that comes in behind those fronts. We can see this air mass pooling over the prairies, just waiting for the invite to move south and east…those two fronts combined may do just that.

Week three looks to have one system working through around the 30th through the 2nd that can bring up to an inch of moisture and another push of cooler air. Week 4 is more active, with a minor front on the 8th to begin the period, then a large, strong front that sweeps in toward the end of that week around the 13th. That last event could bring half to 1.5” rain totals to the entire eastern corn belt, including Indiana. Temps will be below normal both period, particularly so in week 3. Precipitation will be near normal for week three but should skew to above normal in week 4 if our current forecast holds (model map below is not as strong on the system in week 4).