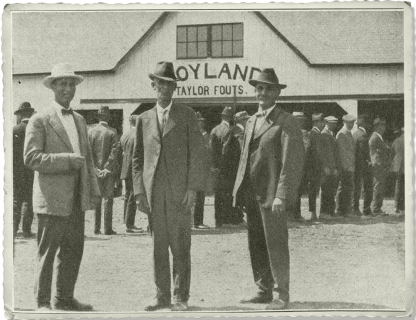 The American Soybean Association will celebrate their 100th anniversary next week and to do it, they’ll come back to where it all started- Camden, Indiana.

Brothers Taylor, Finis, and Noah Fouts had grown an interest in soybeans after their father received soybean seed from USDA in the late 1800s. After many years of experimenting, they finally got it right.

“By 1907, they had amassed about 200 bushel of soybean seed and created their own soybean company, Soyland Seed. That drew a lot of attention. They wanted to share what they had learned with other farmers. So, people would be coming by wanting to see their farm and talk about it. So, they actually had a first soybean day just for Indiana in 1910.”

10 years later, the Fouts brothers decided this was bigger than Indiana and held the “First Corn Belt Soybean Field Day” at Soyland Farms in Camden.

“And over 1,000 farmers came that day from 6 different states, and there was enough interest there they said, ‘We should do this again and let’s create an association that we can all help share these techniques and what we’re learning and the experiences to help us continue to be prosperous with this crop.’”

Modisett Kemp is proud to still have Soyland Farms in the family. She says her great-great-grandfather and his two brothers would be happy with how things turned out.

“I think they’d have been so excited to see how much this had grown from what they were trying to create and we’re just happy to be a part of that and continue that legacy.”

We’ll have more from the event next week. USDA Deputy Secretary Steve Censky will be the keynote speaker.