Cash Rents Will Have to Change 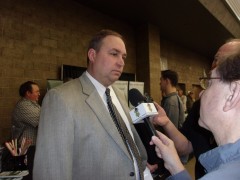 One of the biggest challenges farmers have had this year is negotiating lower cash rent deals on farmland. However, according to a leading economist, the cash rent  agreements of the past will not work in the future. Jason Henderson, head of Purdue Extension, says 2017 will be a year that is slightly better financially for growers but not still not a profitable one, “We will see some improvement as the losses will not be as steep as last year, but we will still see additional financial losses into 2017.”

One of the reasons is that rental rates have not come down as fast as grain prices and profits. Henderson says, over the next few years, cash rent agreements will have to change, “Readjustments of cash rents that went up significantly during the boom must readjust to reality, not $7 corn.”

He said, in some cases, growers may want to start acquiring more land rather than continuing to rent it. Another trend may be rental agreements that share the risk more evenly between land owner and operator, “When you look at the structure of agriculture today, cash rents cannot be structured the way they are and at the rates they are.” He added the industry will not see a return to the highs we saw in 2012 and 2013.