Warmer temperatures and little rain helped with dry down for corn and soybeans, according to Greg Matli, Indiana State Statistician for the USDA’s National Agricultural Statistics Service. Much of Western Indiana was categorized as abnormally dry by the U.S. Drought Monitor. Some areas of the State did receive some residual rainfall from Hurricane Irma, but it was not substantial. The statewide average temperature was 66.6 degrees, 0.1 degrees below normal. Statewide precipitation was 0.27 inches, below average by 0.52 inches. There were 5.9 days available for fieldwork for the week ending September 17, down 0.1 days from the previous week. 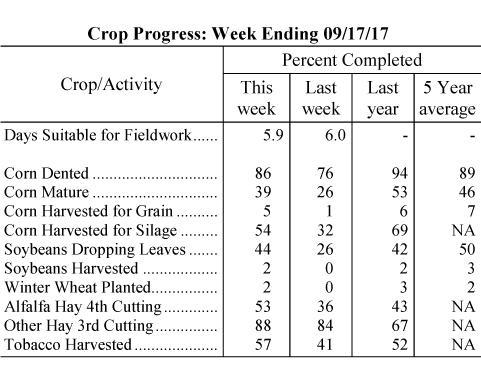 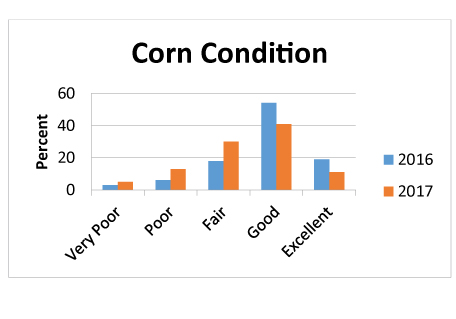 The near-average temperatures coupled with minimal rainfall helped boost crop maturity and dry down. Farmers have begun to harvest corn for grain, although some are concerned that the crop moisture is too high. Corn moisture at harvest was 27%, compared to last year’s 22%. Late planted soybeans could use some more rain to increase pod fill. Some farmers noted high levels of variability in maturity for both corn and soybean fields from late season replantings. Mint and watermelon harvest have begun to wrap up for most growers, but tomato, seed corn, and pumpkin harvest are going strong. 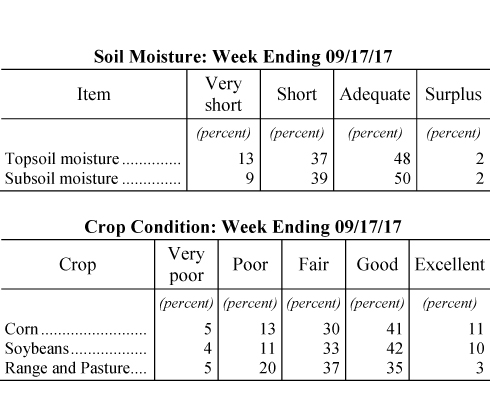 Although the temperatures were up from last week, livestock was reported to be in excellent condition. Hay and pasture growth have continued to slow down and are brown in some areas from the lack of moisture. Other activities included cleaning bins for the upcoming crop, hauling grain, preparing harvest equipment, and mowing roadsides.