Soil moisture has decreased as a result of the lack of rain over the past couple of weeks, according to Greg Matli, Indiana State Statistician for the USDA’s National Agricultural Statistics Service. Spotty showers have been inadequate for proper growth of crops leading farmers to continue irrigating fields. Cooler temperatures helped growing crops use less water. The statewide average temperature was 69.1 degrees, 3.7 degrees below normal. Statewide precipitation was 0.24 inches, below average by 0.65 inches. There were 6.3 days available for fieldwork for the week ending August 13 up 0.9 days from the previous week. 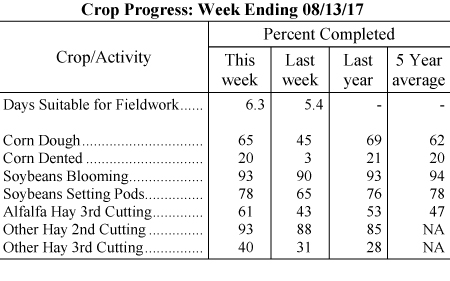 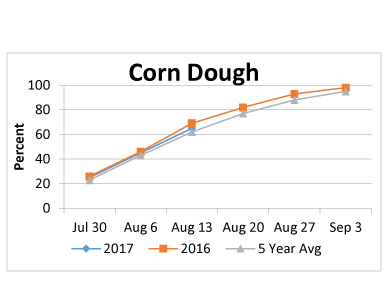 Some areas are starting to show signs of drought stress. Pollination is nearly complete with issues being reported in some areas. Mint and potatoes harvest is in full swing. There have been reports of army worms in alfalfa fields in the southwestern portion of the state. Pastures are reported in good shape but more rain is desired. Livestock are reported in good condition. Other activities included spraying soybean and corn fields for diseases, preparing bins for fall storage, hauling grain, mowing roadsides, scouting for pests, and attending the Indiana State Fair.