Reform is coming to the Environmental Protection Agency’s Science Advisory Board, a board criticized by agriculture for its controversial reviews of air and water regulations. An American Farm Bureau official had complained that EPA seemed to be asking its Science Advisory Board to rubber stamp the Waters of the US. Former House Agriculture Committee Chair Frank Lucas repeated the sentiment on the House floor last week, as the body debated and then passed his bipartisan bill to reform the EPA board.

“Some of the panelists have taken public and even political positions on issues they are advising about,” Lucas said from the House floor. “For example, a lead reviewer of the EPA’s hydraulic fracking study published an anti-fracking article called Regulate Baby, Regulate.”

Lucas said there is limited public input at board hearings, hearing records are incomplete and the EPA even pays some panel members, creating the appearance of a conflict of interest. He says his bill is pro-science and pro-sound science.

“This bill is founded upon recommendations for reform outlined by the National Academy of Sciences, and EPA’s peer review handbook. This bill ensures that the board is balanced, transparent and independent, all of which will prevent the SAB from being manipulated by any group.”

That bill also passed in the House in the last Congress. House Agriculture Committee top Democrat Collin Peterson joined Lucas in co-sponsoring the bill, but most Democrats opposed it. Eddie Bernice Johnson from Texas claims the bill would make it harder for academic scientists to serve on the board, but easier for corporate interests.

Johnson charged the bill is designed to “throw sand in the gears of the advisory board process,” alleging it would have allowed the tobacco industry to co-opt the board in the 1990’s in defrauding the public with bad science.

Lucas, Peterson, Farm Bureau and others made a similar argument about the environmental community and the existing EPA Science Advisory Board. 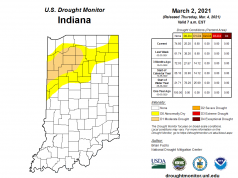