The 2018 session of the Indiana General Assembly is underway. On Wednesday, several hundred Indiana farmers gathered at the capital to meet with lawmakers on priority issues for the new session. It was the 9th annual Indiana Farm Bureau legislative kickoff, an opportunity for Farm Bureau members to articulate to lawmakers the issues impacting their farms. Topping the list was broadband. Justin Schneider, director of state government relations with Farm Bureau, says lawmakers need to understand just how important this issue is for rural Indiana, “This is not just a rural issue, but we need coverage in small towns and cities. We need it for farms, for businesses and schools. We need to get them to understand that what is available just does not work.” 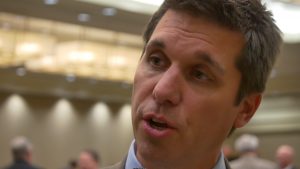 Schneider says, right now, there is no specific plan or bill to deal with the issue, “Indiana does not have a comprehensive strategy on how to expand coverage across the state.” He added many lawmakers do not understand just how poor the coverage is in most of Indiana. The legislature passed a bill last session that dealt with easements for broadband, but was not a bill that moved a plan forward. Lt. Governor Suzanne Crouch, who spoke to the group during the kickoff, expressed support for broadband and said she recognizes the importance of access to rural communities. 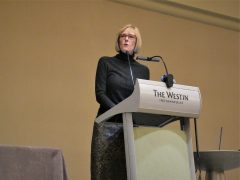 Another top priority is protecting larger livestock operations. Schneider is hopeful this will not be an issue that comes up in the legislature, “We are hopeful we don’t have to deal with the livestock issue this year.” Last session, a bill designed to provide clarification on regulations on CAFOs became a major controversy and became the framework for strong opposition to livestock agriculture by groups like the Hoosier Environmental Council. A summer study committee produced inconclusive recommendations, and Farm Bureau plans to play defense on any livestock legislation. Crouch also pledged to keep an eye on any livestock-related legislation, “We are all in on growth in the Indiana livestock sector. These operations are vital to the viability of our communities and the agricultural economy.” This summer, with the help of Indiana Farm Bureau, over 50 lawmakers visited Indiana livestock farms to get a first-hand look at modern animal agriculture.

Food deserts, tax audits, and annexation are other issues that are on the Farm Bureau legislative agenda. The kickoff concluded with luncheon where farmers and legislators visited one-on-one about the issues and priorities laid out by Farm Bureau.