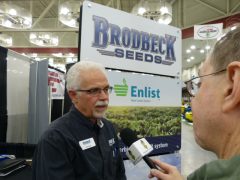 Day one of the Fort Wayne Farm Show on Tuesday saw good crowds despite low commodity prices. According to Rod King with Brodbeck Seeds, “It is January, so everyone is optimistic right now.” He told HAT on the trade show floor that farmers have been talking about planting more soybeans, “Based on our sales, it looks like soybean acres are up.” He added that growers who have stopped by the Brodbeck booth have indicated they have not made a final decision on those last few acres and it is likely soybeans will be the choice.

King warns that planting continuous soybeans has some risks, “ There are some things you need to consider if you are planting continuous soybeans. You have to be very selective on the variety you plant.” He added that disease pressure would also be a concern for those growers planting beans on beans, “For example, brown stem rot would be more likely in a bean on bean rotation.”

King said, if a grower is planting soybeans because it is cheaper to produce, “don’t skimp on fertilizer, especially potash and sulphur.” King also warned not to be too aggressive in reducing planting populations on soybeans.

Coverage of the Fort Wayne Farm Show on HAT is made possible by Farm Credit-Mid-America.