The Fort Wayne Farm Show gets underway Tuesday; and, along with hundreds of exhibits, there will be some great seminars. The show opens at 9am and will run until Thursday. On Wednesday, it will remain open until 8pm. According to show organizers,  with the 2016 completion of the new Conference Center, “The show now offers approximately 1100 booths. This will allow us to display some of the larger pieces of equipment we have had to previously turn away and to include many new exhibitors previously on the waiting list to get into the show.”

In addition, a series of seminars will be held. Hoosier Ag Today’s chief meteorologist Ryan Martin will be delivering two presentations on what the growing season forecast might be like in 2017. 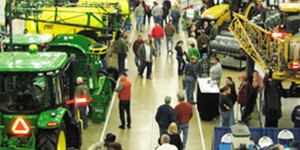 Martin says the Eastern Corn Belt may be looking at a wet spring which will impact planting and may impact what crops get put in the ground, “The models show a wet April and a wet first two weeks in May.”

These trends will have market implications. Thus,  Martin’s program will be paired with Jon Cavanaugh, Marketing Director Central States Enterprises, and David Kohli, Market analyst for HAT, on Tuesday at 9:30am and with Dr. Chris Hurt, Ag Economist at Purdue, on Wednesday afternoon.

In addition, Purdue Assistant Dean Jason Henderson will present an overview of the farm economy and Indiana Farm Bureau President Randy Kron will discuss policy issues on both the state and federal level.  Several other sessions by Purdue Extension and the Indiana Soil and Water Conservation Districts will take place during the show. In support of Indiana’s FFA scholarship foundation, a fundraising auction will be held at 1:00 pm both Tuesday and Wednesday, featuring a variety of donated items. Last year’s auction raised over $20,000.00 for scholarships.

Watch for reports direct from the Fort Wayne Farm Show on this web site, made possible by Brodbeck Seeds and Farm Credit Mid America.