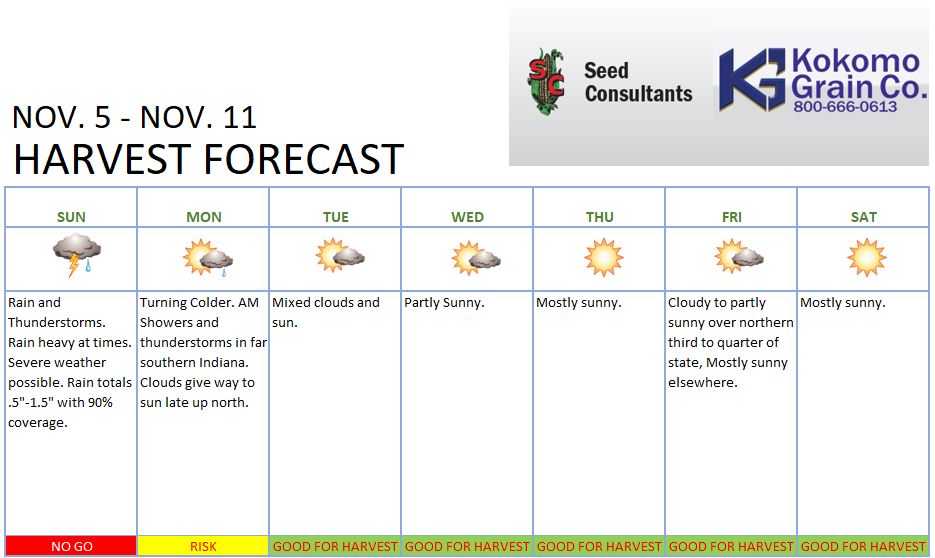 A strong cold front moves through the region as we finish the weekend Sunday. After all the on and off rain, we have had to deal with over the past few days, this is the culmination of the moisture for the eastern corn belt. The front strengthened on our outlooks last Friday and does not show signs of weakening at this time. We expect .5”-1.5” of rain over 90% of the state for Sunday through early Monday. The map above shows a snapshot of action Sunday night. There is potential for strong thunderstorms and we won’t rule out even a few severe storms, but we think that severe weather is being talked up more in other parts of the media that really needs to be. Heavy rains will be in over areas from I-70 north for Sunday evening, and moderate to heavy rains then slip south of I-70 for Sunday overnight – past midnight. 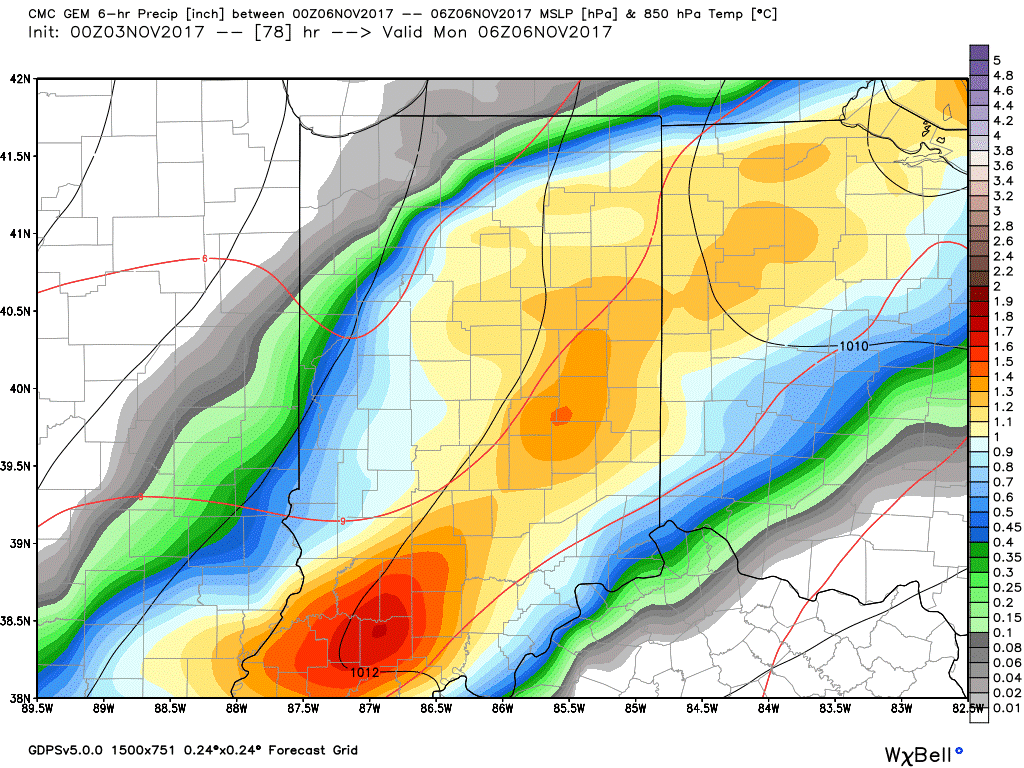 Colder air moves in for Monday behind the front. We can see some lingering showers or thunderstorms near the Ohio River in the morning, but they will be retreating south and east rapidly. Clouds may even a part for some sun in the northern third of the state by late in the day Monday.

After some concerns late this past week about secondary systems trying to move into the region next week toward midweek, we are comfortable saying those will steer clear of the state, and we are calling for a dry period from Tuesday right on into the weekend. We may see a few offshoot clouds over southern Indiana Tuesday into early Wednesday, and similar fringe clouds over northern Indiana on Friday, but we expect no new precipitation for the period, which should allow for some drying. However, much colder air will be in place, and therefore, drying will be slowed. Temperatures will go from well above normal for the weekend to sharply colder for Monday, and then most of next week normal to below normal.

So, after some significant hurdles, we may be able to squeeze out 3-4 dry days back to back next week, after this current system finally leaves the region Monday. Time will tell if that is enough to get back at harvest on a grand scale.

Ahead of that system for the 13th-14th, we have temps bouncing higher again, to be followed by a dramatic fall off at mid-month. We should be well below normal as we kick off the second half of the month.

For week 3 we see a strong low in the Great Lakes around the 21stthat sweeps a front into the region giving .25”-1” of rain. There will be much colder air behind that system. Overall for the week, we see temps near normal (near to above to start, colder to finish) and precipitation above normal. In week 4, strong, cold high pressure starts off the week. We do have a weak frontal boundary working into the area around December 1. This may be a warm front that could trigger some overrunning snows. We’ll see. Still, temps look to be near to below normal, with precipitation below normal.