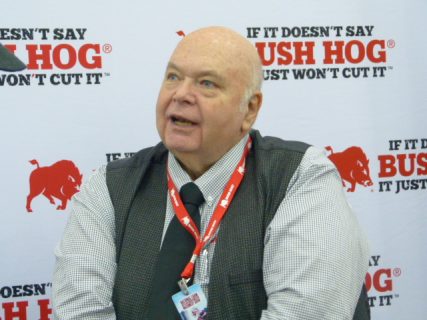 Corn and soybean futures markets are acting a lot like they did during the 1980s. According to Bob Utterback, “A sideways trade with brief periods of silliness caused by weather.” The nationally-known market analyst based in New Richmond, Indiana told Hoosier Ag Today some of that weather silliness could occur in the next few weeks.

“It is wet, and that leans more toward a delay in corn planting that could spark a jump in corn prices.”

Another factor that could get the markets out of their current dull trade is more soybean purchases from China.

“The expectation in the trade is that some kind of commodity announcement will be made before the March 1 deadline, so both sides can say some kind of partial agreement has been reached,” said Utterback, who is appearing at the Bush Hog booth at the National Farm Machinery Show this week. Utterback spoke with HAT during a Facebook Live broadcast on Wednesday.

Many of the farmers visiting the farm show this week still have grain bins full of the 2018 crop.  Utterback says if they still have soybeans in on farm storage, it is time to let it go.

“South American soybeans will be coming onto the market in the next few weeks. So, if you don’t sell now, you may have to wait until August for the next weather sponsored rally.”

Utterback said he would rather hold corn, hoping for a market rally than hold soybeans. He stated that the very large world supply of soybeans will continue to weigh on prices and keep the market under pressure. He added that this fall we could see basis levels $1 under fall futures prices.