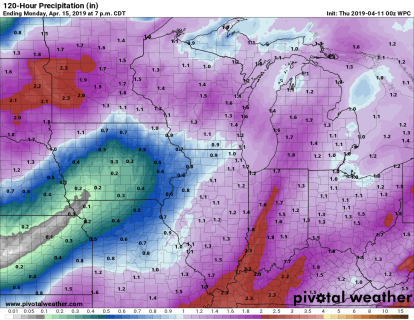 The approach of a powerful storm system across the Central Plains will send a surge of southerly winds across the state on Thursday helping to push the mercury through the 70’s and even into the lower 80’s for some with plenty of filtered sunshine. The only exception will be for far northeastern parts of the state which will be situated on the wrong side of a stationary front with more clouds, backed winds out of the east and highs only in the 60’s. Wind gusts could top 45 mph at times prompting the National Weather Service to issue a Wind Advisory for western and southern parts of the Hoosier State.

This warmth along with a stream of low-level moisture may set the stage for some rough weather Thursday night with a squall line of showers and thunderstorms expected to traverse from west to east across the state. Some of these storms, especially for Western Indiana could be strong with damaging wind potential. The Storm Prediction Center has a Slight Risk in place for Eastern Illinois and Western Indiana. Rainfall on the order of a half inch to an inch appear likely at this.

Showers look to come to an end during the morning on Friday with afternoon clearing. Winds will remain elevated out of the southwest as temps cool into the 50’s north and 60’s south.  We slide into the weekend on a dry note as high pressure looks to bring some quiet conditions Saturday with highs remaining in the 50’s and 60’s statewide.

The potential for heavy rainfall is going up as another low-pressure center looks to track from the Lower Mississippi River Valley into the Lower Ohio Valley Saturday night. While the heaviest rainfall looks to occur during the morning hours on Sunday, the potential for showers will remain throughout the day. This could be a real soaker with current data suggesting that southern parts of the state could be looking at 1 to 2 inches of rain out of this system with totals on the order 0.5″ to an inch across northern parts of the state.

Next week looks to start out dry and relatively cool on Monday. However, we should warm it up quickly by Tuesday afternoon. The chance for showers returns late Wednesday with perhaps more heavy rains by next Thursday. Data suggests another cool down heading into next weekend.