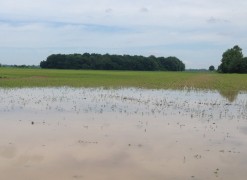 Too much rain has Indiana farmers concerned about their crops. HAT meteorologist Ryan Martin says the last two weeks rain totals in the north range from 5-7 inches, and 1-3 inches south. But that doesn’t include rain totals over the last 24-48 hours that have ranged from 1-8 inches. It’s leading farmers to assess possible production declines this year of 10-20 percent for corn and soybean fields. That doesn’t surprise Martin.

“We are well above normal from basically mid May through mid June. So take the past 30 days and we are well above normal, so I would say that’s close. The 20% side seems a little high to me except maybe on the soybean front just because beans are less water tolerant than corn. I will say if that’s the number that’s being thrown around right now, we can probably look for that to increase maybe another 10% here by the time we get into this time next week because I’d say at this point we’re half done with the rain that we’ve got coming or we had forecasted for this current period.”

His near term weather models don’t show any improvement in Indiana.

“The rest of this week through the weekend, nasty,” Martin says. “We’re going to be seeing the rain and not a lot of sun. The difference in the pattern that emerges next week is a step in the right direction, but it’s probably not enough. What I see next week and then probably on in to early July is a pattern that has rains coming, still good, heavy rains, a system next Thursday, the 25th-26th timeframe I think could do half to 1 ½ inches.”

“I’m looking for a deep trough, a cold air event, to try and break out over the eastern half of the country right around the turn of the month. So I think July is going to start well below normal on temperatures. I expect it to be below normal for the entire month, maybe not a big bunch but some.”

At this point August weather doesn’t appear to hold any extreme conditions. Martin sees decent precipitation and normal to slightly below normal temperatures. He tells HAT as we look further out in the forecast prospects for crops recovering get better, but current damage assessments could be much more dramatic in just five days from now.