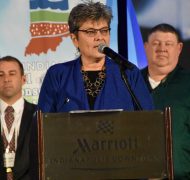 The Annual Conservation Awards Luncheon yesterday wrapped up the 75th conference of Indiana Soil and Water Conservation Districts, and the final recognition was reserved for the retiring Indiana State Conservationist, Jane Hardisty.

“I want to thank you all for all of your support, putting up with my pushy ways as I’ve been told, my pushy style, my commonsense style, my fun way of doing things, and my love of the land, and most of all the love of you people, she told those attending the luncheon. “It’s been my honor to be your State Conservationist. Thank you very, very much.” 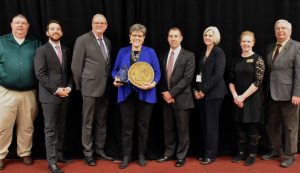 In 2010 Hardisty spearheaded the Soil Health movement. Through her leadership the movement is stronger than ever today and has put Indiana on the map as a conservation leader in the U.S.

“As you know, the bar has been set pretty high for Indiana, so I am really counting on you all to keep carrying that soil health banner.”

Jamie Scott, President of the Indiana Association of Soil and Water Conservation Districts told HAT one of Hardisty’s best accomplishments has been to simply get more out of the people who are a part of the conservation world. 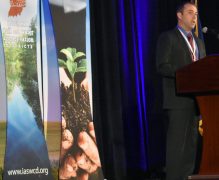 Jill Reinhart from the Indiana NRCS office has been tabbed as acting State Conservationist for Indiana for 120 days while a permanent replacement is determined.