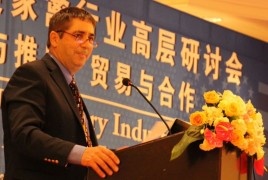 The United States is the world’s leading soybean producer, and right now it has the rivers, roads and rails to move all those soybeans from field to market. However, this status might be in danger without continued investment in the U.S. transportation system.

Beam says the amount of investment Brazil is putting into improving its infrastructure is staggering.

“I guess as an American producer, it’s pretty obvious that you know we got some serious competition down there which I don’t think that’s surprising anybody, but I was surprised at the sheer amount of investment in everything as far as infrastructure.”

Brazil’s infrastructure is still not as good as the United States. But through investments, it will not take long to catch up. This adds to the need to ensure the U.S. transportation system is well maintained.

For more information on the importance of U.S. farmers maintaining their competitive advantages through transportation, visit WWW.UNITEDSOYBEAN.ORG.