Perdue Worried About Attracting New and Young Farmers in this Climate 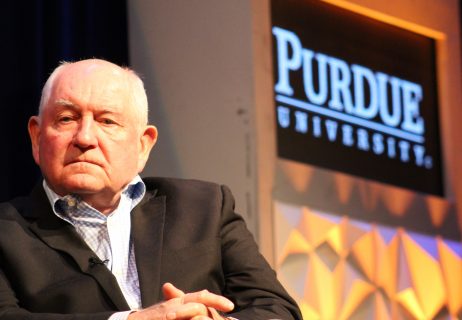 “There’s nothing more sustainable and more encouraging than profitability on the farm.”

That is the problem right now in many cases, especially for the young and beginning farmer. Ag Secretary Sonny Perdue at Purdue University last week said, “You’ve got parents out there that have children here at Purdue or other universities that aren’t sure they want their children to come back (to the farm) because of the rigors of economic stress that we’re going through right now.”

“I would love to see of our older farm generation that may not have heirs that want to come back to the farm, let’s develop a mentor/mentee relationship there for older farmers. You know, farmers love to give and to teach, and to show other younger people some things. They come out of a great university and sometimes we think we know it all. We can learn a lot from somebody who’s been on that ground for their career and understanding what really works. So, one of the things we’re trying to do is develop, in our young farmer program, a mentor relationship.”

Perdue added that it could be very beneficial for older farmers to serve as a mentor as the mentee may be a possible buyer of that land when they retire.

Perdue believes agriculture is still an industry that should attract young people.

“I’m bullish on agriculture because of the future productivity increases and other things. We’ve got to resolve the overall trade issue and make sure that we can have a profitable, sustainable agriculture through trade and not farm support, aid, or subsidies but have a product that is low cost, it’s healthy, safe, and nutritious.”

Secretary Perdue had more reason than just being at a land-grant university last week to discuss this. According to the US Labor Department, the average age of the American farmer and rancher is 58 years old. When USDA’s NASS begins to release the 2017 Census of Agriculture on Thursday, it’s likely you’ll see that number increase yet again, as it has for the past 30 years.