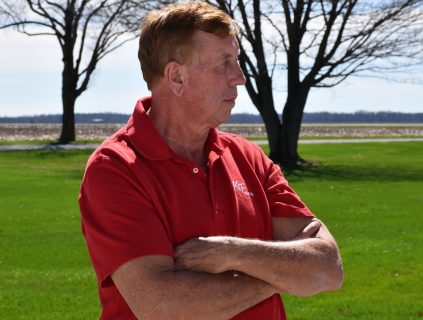 Indiana farmers are ready to get started planting their crops, but as we’ve known for some weeks now, it’s going to be a juggling act with Mother Nature calling the shots in the coming weeks. In Tippecanoe County Alan Kemper has done all he can do to be ready when the fields allow him to get going.

“We’ve been fortunate, we have about 95 percent of our spraying, ammonia or nitrogen on the ground, so that’s really good for the corn,” Kemper told HAT last week. “However, most farmers in our area, including us, are running about 2 ½ weeks behind normal. We would like to be out there actually planting corn and running some soybeans in.”

He said it’s important to have the spring battle plan and equipment ready when the windows to plant open, and Kemper hopes those windows are longer than just a few hours here and there.

“A couple years ago we would have two- and three-hour time blocks that in the afternoon we could hit, and the next day it would rain again, so that’s hopefully not what we’re going to get into.”

On this farm just south of Lafayette the battle plan for crop mix has seen a significant adjustment this year.

“With the trade wars going on, particularly with Mexico and China, we’ve switched more over to corn than normal. We’re heavier corn, about 65 percent corn and 35 percent beans, which is actually very strong on corn. But, we’re sitting here with an ethanol plant and a sweetener plant in the area.”

Running two planters, Kemper can plant 200 acres of both corn and beans on a good day, and for optimal yields he would have started days ago.

“We start losing yield on beans and corn both, and you didn’t use to say that on soybeans, but we will lose yield potential starting around the 20th of April,” he explained. “The old school was on May 10th you’re still good on beans and corn, but most data from Beck’s and other seed companies shows that maximum optimal yields are really here in April.”

So, the nerves are running high right now, over ability to get the crop planted and get a good price for it.

“Most farmers are extremely nervous about the profitability of agriculture right now because we haven’t had a lot of chances to lock in the 2019 prices yet for this crop.”

What are prospects for planting this week? A whole lot of rain Sunday didn’t help. Ryan Martin tracks it all in his Indiana Farm Forecast.