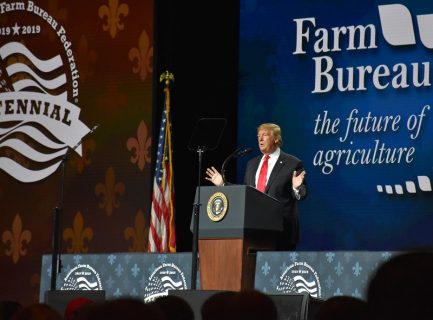 Members of Farm Bureau’s across the country heard from President Donald Trump Monday at the 100th annual convention in New Orleans. During his second AFBF speech in as many years, Trump talked about border security, the wall, the partial government shutdown, all the things you would expect to hear from this president. But he didn’t disappoint farmers as he ran through a list of his administration’s accomplishments.

“On every front we are fighting for our great farmers,” he said. “We’re ensuring that ethanol remains a vital part of America’s energy future with E15 year-round, all twelve months. We are fixing broken trade deals that are horrible. Many, many new markets are being opened up. We’ve eliminated a record number of job-killing regulations, and to keep family farms in the family, we have virtually eliminated the estate tax, also known as the death tax.”

Reacting after the speech, Indiana Farm Bureau vice president Kendell Culp said he heard the President address important issues to agriculture, but he didn’t get all the detail he hoped for, especially on trade with China.

“We heard a lot of things that sound like a policy list of priorities with Indiana Farm Bureau, but the one area that was pretty shallow was details about trade,” Culp told HAT. “He mentioned the USMCA agreement, which has been very positive but needs to be adopted and ratified by the countries involved, but we didn’t hear too much about China and the tariff situation. We didn’t hear too much about some of the other countries that we’re working on trade deals with, so I was hoping to hear more about trade. But the rest of what we heard was pretty positive.”

Trump expressed confidence the U.S. congress would do the right thing and ratify USMCA, “but I’m not quite as confident as he is on that,” Culp said. “Historically on trade agreements the U.S. congress, no matter what administration in in place, takes their time to get those ratified, and the U.S. is usually the last country to get that put in place.”

Culp is with the president in hoping congress puts political differences aside to pass USMCA. He said farmers thought the original NAFTA, which USMCA replaces, was a good trade agreement with Mexico and Canada, although there was room for improvement, especially for the manufacturing sector.

Trump did spend plenty of time on border security concerns and the need for a wall. His comments altered Culp’s thinking on a border wall because of the current drug crisis across America, a crisis that has hit rural communities very hard. Culp said we must get the problem under control, and if a wall helps shut the drug flow down, “a more sophisticated business than I ever dreamed it would be,” then it may be the right answer.