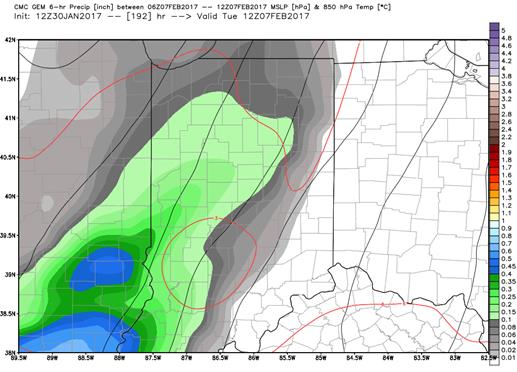 A strong low moving over Michigan today will bring snows to extreme northern areas. These snows initiated last night, and in lake enhanced areas are seeing some slightly better totals…up wards of a few inches, in Elkhart, Lagrange and Steuben counties. Going forward, through the day today, we will see the best precipitation continue to stay north, but as we move more on the backside of the low pressure circulation, we would not be surprised to see some wrap around clouds push farther south. So, we look for the best sun today over southern Indiana, a mix of clouds and sun over central Indiana, with more clouds later in the day, and plenty of clouds up north. While there can be flakes in the air anywhere north of US 24, the best snows will be far north up along the Michigan line.

Cold air sags south over the state tomorrow, and clouds will still be a presence in many areas. However, new precipitation is not likely, outside of a flurry or two over the northern half of the state. Sunshine should try and work its way out before the day is done. High pressure will be in control from late tomorrow afternoon an evening through Thursday, Friday and Saturday.

Our next system looks a little more impressive this morning. Winds shift to the south late Saturday afternoon and bring some warmer air in. this will be ahead of our next system that comes in Saturday overnight through the first part of Sunday. The low looks to track south of the state, but is trending north over the past couple of model runs. That means we are looking for some snow and rain to push into the state in this period. Snows will be seen mostly north of US 40, and a rain/snow mix from US 40 to US 50. We expect all rain south of US 50. Moisture totals are not impressive, with a few hundredths to .15” over the northern half to third of the state, and .25-.5” (liquid equivalent) over the southern half of the state. Coverage of at least some precipitation looks better this morning, and we will put it at 80%. Temps of freezing or below will be felt behind this system all the way down into the southern quarter of the state…so this system will draw down some cold air, mostly on Sunday afternoon.

Dry for Sunday night and Monday, and winds Monday shift back to the south, so we should see moderating temps. However, our next system comes quickly thereafter, with a strong low coming out of the central and southern plains, working northeast. This low tracks right across the state next Tuesday, the 7th. With the strong south winds and warming air, we look for mostly rain at this point, but the system looks much stronger than 24 hours ago. So, we are stepping up our precipitation potential, looking for .25”-1” rain totals for Tuesday with coverage at 90%. WE will not clear out nicely behind this wave either, with lingering moisture for Wednesday. That moisture will hold as cold air pushes in through the day. That means we are talking some snow for next Wednesday over the northern third to quarter of the state, with the potential for some accumulations. Snows farther south are not likely, as cold air does not come in fast enough to see significant moisture. But, up north we also will likely have to deal with some lake enhancement. The map above is a potential set up for next Tuesday morning.

Dry to finish next week for Thursday and Friday. A clipper-like system moves across the great lakes next Saturday afternoon into Sunday, and we likely see snow in the Hoosier state from Saturday late night through Sunday midday. Moisture potential signals that we could see some accumulation over 60% of the state, but it is very early to commit to anything dramatic. We follow that up with another clipper and minor precipitation potential for Monday into Valentine ’s Day Tuesday. At the very end of the extended window, we see a strong low in the northern plains and Canadian prairies that could signal a strong batch of rain or snow for the 16th and 17th. This means the active pattern we were looking for mid-month has not folded and gone away just yet. The strength of any system in here early next week likely will set the stage for how strong pattern can be going forward, so our eyes are looking keenly at next Tuesday.