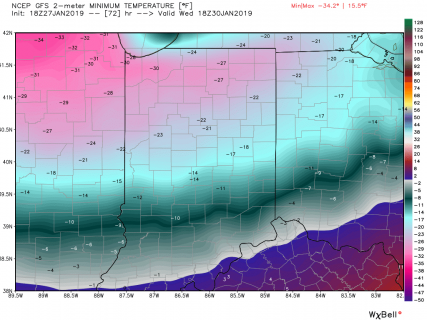 We are dodging a bullet here today with our next snow event. Over the weekend, the storm moved to a decidedly northern track across the country, coming from the Dakotas across the upper Midwest and the Great Lakes. This northern track means more of the state misses out on precipitation, and areas that get it today will end up with less than we feared back when we last chatted last Friday. Snow will be the most likely precipitation type in the northern third of the state, while we still think there can be rain trying to mix in on the southern fringe of the event as it passes by. That puts the mix in from US 24 southward, but we still think that will be relatively minor in terms of both amount and coverage. The breakdown of precipitation looks like this today: 3”-6” expected in the northernmost counties, near the Michigan line. We can see 2”-3” (perhaps 4” in a few isolated areas) from US 6 south to SR 14. Then from SR 14 down to US 24, a coating to 2 inches can fall, and we have to watch for a little bit of rain mixing in the closer you get to US 24. South of US 24 down to SR 26, we can see minor precipitation with no real accumulation, and then from there south, we should escape with just clouds. All of southern Indiana will stay precipitation free today.

This snow event, while an interesting start to the week, is not the headline that has garnered most of the attention over the past number of days. We get significantly colder behind this event for the rest of the week. Temps fall tomorrow, and the we stay below zero from tomorrow night through Wednesday and Thursday, before bouncing back into positive territory on Friday. Many media outlets have been hyping up the “record” nature of this cold. That is a bit of a misnomer and is purely talk to get people’s dander up. Is it going to be cold? Sure!  But it has been much colder than this here before. What some are talking about when mentioning records are the “record daytime maximums”. Also, the numbers that have been thrown around the most (multiple maps showing -35 to -50 across the corn belt) are wind chills. Wind chills are not to be minimized by any stretch of the imagination. But, overnight lows will be significantly warmer than that…and if we can get the winds to break sooner…we automatically see the wind chill numbers become less ominous. Still, bitter cold will be here, and we have not seen cold like this in a good number of years.

These are more northern plains and northern MN type temps than Indiana temps. Be ready. No one should be surprised by this cold air outbreak. Livestock is first to mind with this cold, but also expect delays at grain facilities (potential scale freeze ups) and problems with transportation logistics. Plug those diesels in! The map below shows morning lows Wednesday morning – and we should note, these likely wait to happen until closer to 8 or 9 am…near or after sunrise. Impressive cold.

Temps start to moderate Friday, but stay well below freezing. This weekend looks to be when our next round of precipitation shows up. Clouds and some scattered light precipitation tries to pop up on Saturday, but stays in the “wet snow” category. Then on Sunday, we do see temps climb up to levels mild enough for rain. We expect rains from .25”-.75” through Sunday, with coverage at 90%. A final wave bring scattered light showers Monday, perhaps another few hundredths to .2”, but that could feature a mix of rain and snow.

Colder air makes a return toward midweek next week. This will be brought on by another strong low moving from the west/southwest. This system brings rain that quickly changes to snow, as the low tracks from Mt Vernon, IL to Toledo. Liquid equivalent precipitation totals right now look to be at least .25”-.75”, but with the track of the low, we could see some moderate to heavy snow track through here, if we get enough moist, mild, south flow in ahead of the low circulation.

The extended picture shows at least two more snow events that can be significant. One for the 10th-11th that brings potential for moderate to heavy snow, and then another for the 13th-14th that could be similar. Temps stay below freezing for the entire extended 11-16 day period.