No significant changes to the forecast this morning. We still see chances of moisture in over at least parts of the state through the end of the week. We are tweaking next week slightly this morning. For today we have scattered showers developing over the state once again, mostly from midday through afternoon and evening. These will be expanding to nearly statewide coverage as we move through the day. We will officially look for a few hundredths to .4” over 70% of the state. Tomorrow, we have scattered showers with 60% coverage from I-70 northward, giving another few hundredths to .4”. Then for Thursday, scattered showers with 75% coverage, giving .05”-.6”. On Friday, we start to wind all this down, but still, we can’t rule out a few showers south of I-70 that can add another few hundredths to a tenth or two. Coverage for Friday will be only about 40% of the state south of I-70. Still, over the next 4 days, almost all parts of the state see at least some minor rains.

Dry weather in is for the weekend and next Monday. However, temps will be cooler, and we actually expect our daytime highs to be below normal for the period, as the front late this week ushers in a nice drop in temps.

Tuesday and Wednesday of next week look drier. AT this point we don’t want to completely rule out a scattered shower or two, but in general, we are only saying to keep an eye out, because we really think most of both days and most of the state will stay dry. Thursday will start to point toward a transition, as clouds build and we look for showers to eventually move in at night. The map below shows cumulative 10-day rains over the state. Note that a majority of these rains fall in the next 4 days, not very intense on any given day but the totals for the period look adequate. 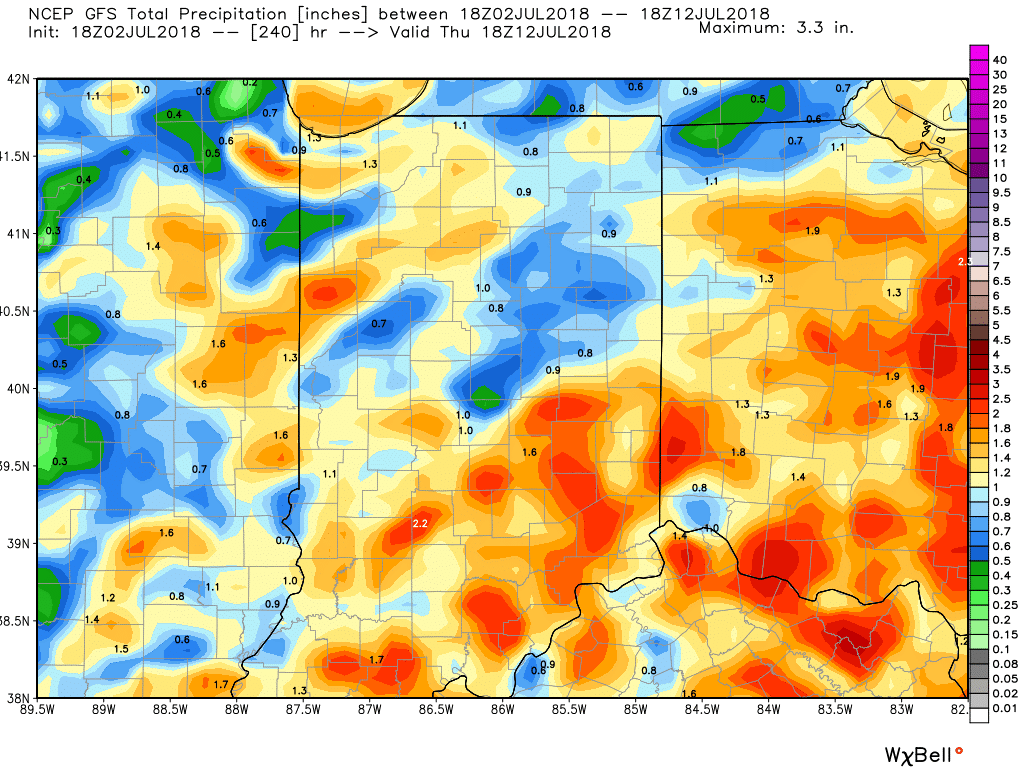 We see 2 systems in the extended 11-16 day period. One batch of moisture for Friday the 13th through Sunday the 15th will bring moderate rains with totals from a half to 1.5” and coverage at 100%. Then after a dry window for the 16th and 17th, we have another wave arriving around the afternoon of the 18th that can bring moisture back and may have a potential of .25”-.75” and 80% coverage.