Today is looking rather wet as the remains of Alberto push into the area. Moisture began overnight and early this morning in far SW Indiana and will be building north from there. The low looks to track north along the Indiana-Illinois border through midday. That puts the heaviest rains this morning in eastern IL. However, the low looks like it want to then drift more east and moves on a line from Crawfordsville to Columbia City this afternoon, sitting in NE Indiana around sunset. That path would bring heavier rains of 1-2.5 inches into NW Indiana. So, we are watching that closely, as it could lead to some localized flooding. Then the low tracks into southern Michigan by midnight tonight, taking the heavy rains with it. The map above shows rain totals through midnight tonight. Through tomorrow we see lingering moisture over the state, but it is much, much lighter than what we see today. Today we expect rain totals of .25” on the low end all the way up to 2 inches on the top end. And, if that track holds true, some parts of NW Indiana can exceed that. Tomorrow, we like rains of a few hundredths to a quarter of an inch, and most of those will be over the southern half to two-thirds of the state. Still…most of us are going to see a very soggy couple of days. 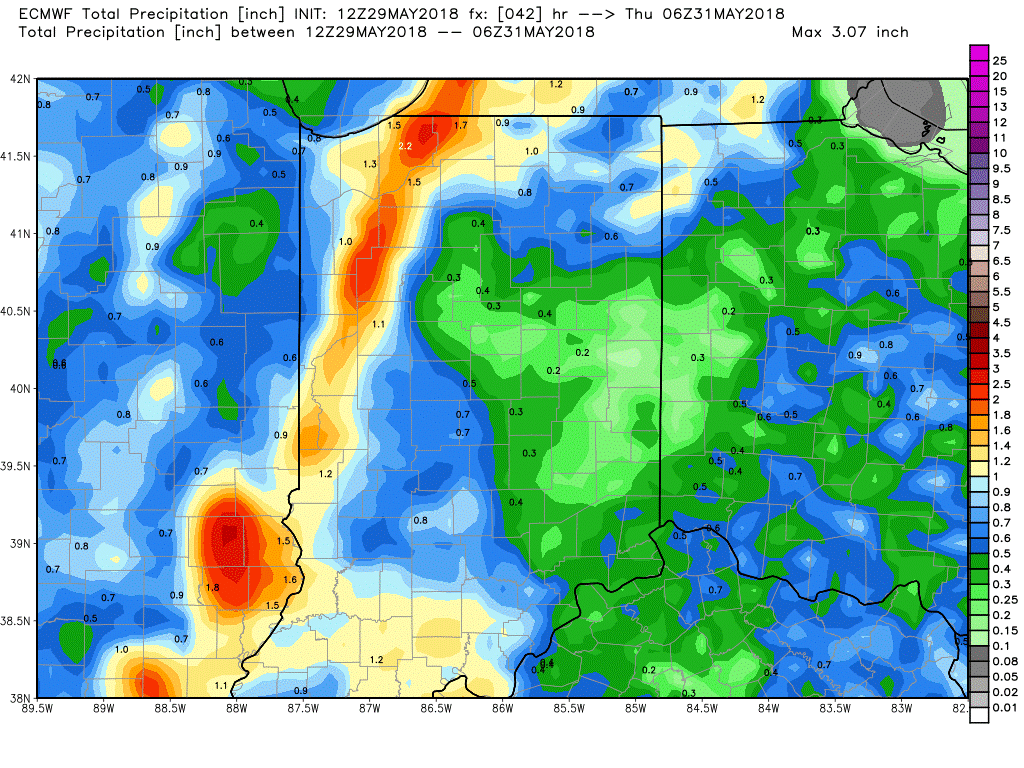 Far southern Indiana may see a little rain to start Friday, but generally, we are drier to finish the week. The rain in the south will be mostly in KY, and moving into OH, but we won’t rule it out across the river in our southern counties. It will be gone by mid-morning. The rest of the state sees the sun return, and that sun stays statewide through Saturday.

A weak trough moves through overnight Saturday night. Moisture looks to be very light, and we think that most areas miss out on anything of consequence. For now, we will keep a chance of a few scattered light showers in the early Sunday morning hours, but clouds will be breaking up already by midday and early afternoon. There likely is just a minor wind shift with the trough, and there is not enough moisture to work with to produce good precipitation.

Dry weather holds then for the balance of Sunday, Monday, Tuesday, and Wednesday. Temps will be normal to above normal and we should see good sunshine, drying and fieldwork conditions. This will be followed by a strong cold front for next Thursday, bringing half to 1.5” rain potential with strong thunderstorms and 80% coverage

No change for the 11-16 day extended period. Our next front likely hits toward the early to middle part of the extended window, around the 10th (late) through Monday the 11th. Rain totals are not over the top, but we can see .25”-.6” over about 70% of the state. Then we go back to strong high pressure dominating to finish the period for the 12th and 13th.