Partly to mostly sunny and pleasant over the northern half to two-thirds of the state today. However, Harvey will impact southern areas later this afternoon and through the night tonight. We have left our rain forecast alone once again. We look for rains from Harvey to stay south and east of a line from Vincennes to Richmond. WE are moving the heaviest rain totals to just south of the Ohio River into Kentucky now. We do not think there will be any threat of 3” rains in Indiana. Rain totals south and east of that line will be from .25”-2” with coverage at nearly 100%. North and west of the line, nothing but clouds. The lowest rain totals will be closer to the Vincennes to Richmond line. 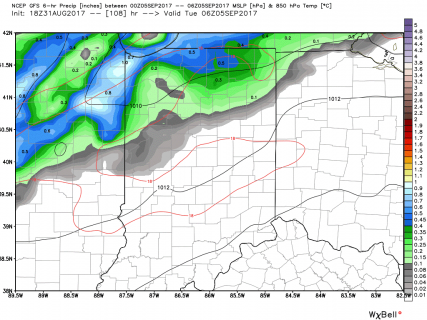 Tomorrow, as we start the weekend we have to deal with clouds trying to leave the southern half of the state. There may be a few spits, sprinkles or showers still hanging around close to or after sunrise, but they move away quickly and the clouds will break up. WE expect the sun over the northern third of the state all day, clouds giving way to the sun over the rest of the state for the balance of Saturday. Continued sunny for Sunday and Monday.

A front sweeps into the state late Monday night, bringing rain and thunderstorms near midnight over the northern third of the state. That rain sags south and east through Tuesday. Rain totals can be from .1”-.7” with coverage at about 65% of the state. The best threat for the upper end of the range will be in the northern third to quarter of the state because that is where we see the biggest thunderstorm threat around midnight Monday night. The map above shows a potential set up around midnight Monday night. The rain bands weaken from there.

Behind that system, we are back to drier air for the rest of the week. A system for late Saturday into Sunday looks to stay east, hitting mainly Ohio, while we see some blow over clouds here, and no significant precipitation. In the extended 11-16 day window we are continuing to keep an eye on the 13th-14th period for a front, but the latest models have decreased that projection dramatically, and we may end up with little to no rain through mid-September. We want to see how these models evolve over the weekend.

Also, you will be hearing a lot of talk about Irma, a hurricane in the Atlantic. It is way too soon to tell where this girl is going to go…but it could have an impact on the US mainland late next weekend. We will be watching and will update you on any potential eastern Corn Belt impacts after the holiday.