The forecast pattern solidifies this morning with our dry run continuing through the weekend and through the first part of next week. This is not a surprise, as we have been calling this pretty much all week. We did have to deal with some clouds building in over the state yesterday afternoon and there can be some clouds lingering today. This may keep our temps from climbing too fast today, but we also do not see any precipitation threat from these clouds that may move through. We also see full sunshine for the rest of the week and weekend, which will allow for significant warming.

Florence is slowing as she nears the coast and will be a very strong hurricane. As she slows, we project a slight drift or turn to the south. This will continue throw plenty of moisture in over the southeast, but with a strong high still here over the corn belt, that moisture will not have any means of moving toward us. We are calling for dry weather right on through Wednesday midday over Indiana. There looks to be a better threat of scattered showers next Tuesday in southern and far eastern Ohio, but we do not expect any problems back here. Offshoot clouds mixing with sun in eastern Indiana will be all we look for right now. The map at right shows precipitation potential through next Wednesday morning – basically nothing! 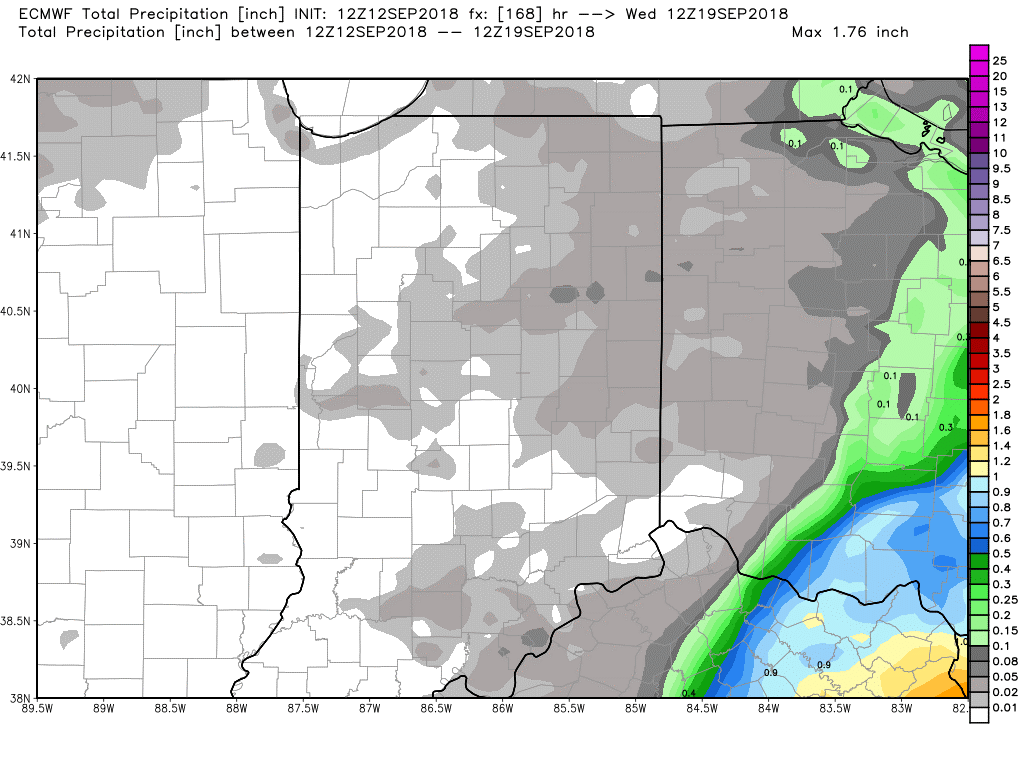 Our next front moves through quickly later next Wednesday afternoon and Wednesday night. Rain potential is minor, a few hundredths to .3” over 60% of the state. Then we are dry for the balance of the week, next Thursday and Friday. Later Saturday we have a stronger front moving in from the NW, which can bring up to .75” of rain to about 70% of the state. That system is much, much more organized.

In the extended window, another system for the 25th could bring scattered showers back. However, we are more interested in the air masses behind that front and the one before it. WE are seeing signs of Canadian high pressure settling in over the prairies and the northern plains late in the 11-16 day forecast window. So, we think the front for the 22nd, and the front for the 25th will be what we need to usher in this cooler, drier Canadian high pressure dome. This will take temps from the above normal levels we see this weekend and next week to near normal and perhaps even a bit below normal as we look to finish out the month of October. That being said, there is no thought about of concern over any kind of early cold snap or frost. But, we also are not going to see the warmth of the next week or so hold right on into early October either, the way it looks right now. This is a good harvest forecast, though, with very little precipitation threat until next weekend (we are already discounting the midweek event rather heavily)