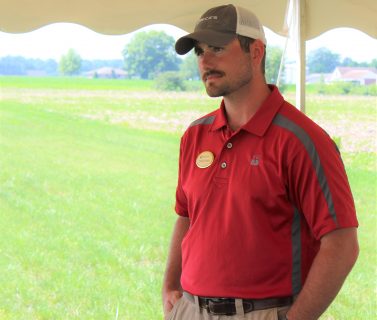 There are still some soybeans around the state that need to be planted, including double crop beans after wheat harvest, and more beans that have been planted yet to emerge. With all the late planting this year, weed control will be a major hurdle for farmers. Austin Scott, field agronomist and herbicide specialist for Beck’s Hybrids, says utilizing a systems approach is incredibly important.

“Start clean and stay clean. Utilize a pre-emerge herbicide when those beans are freshly planted. A lot of our growers do a really good job of that. A lot of growers put out a pre before the beans come up, but I think where we could get better in our approach to managing weeds is utilizing an in-season residual. So, coming back, after the beans are up, spraying with that approved dicamba product and layering on another residual at that time.”

“An ounce of prevention is worth a pound of cure in my book. That weed is a whole lot easier to keep from emerging than it is to kill it after it’s up. So, those residuals, utilizing multiple sites of action, for those weeds we’re targeting is going to be key. These weeds are developing a resistance to the specific sites of action very quickly, so it’s always important to not just use one. Use two and three sites of action if we can.”

Scott is located in Tennessee but has some territory in Southwest Indiana for Beck’s. He told the group at the Beck’s Herbicide Insight Day’s in Effingham, IL that specific weed issues tend to start south and move north. Scott said that what they’re seeing right now is a lot of grass failures with glyphosate, and that could be moving north to Indiana before we know it.

“We’re starting to see a lot of glyphosate resistant grasses pop up in in the state of Tennessee. We’ve had Johnson grass, and goose grass, and things like that in the past it that we can manage around, but specifically last year we had mass failures on a grass called jungle rice. Jungle rice is a very close relative of barnyard grass and I know there’s a lot of barnyard grass throughout the state of Indiana. So, that could be a potential hazard moving forward, jungle rice and barnyard grass becoming glyphosate resistant and being a major issue in your state.”