July 1 was a big day for US agriculture as the long-awaited United States-Mexico-Canada Trade Agreement entered into force. Why is USMCA so important to Indiana agriculture?

Bruce Kettler, director of the Indiana State Department of Agriculture, says 2016 data shows that over $800 million worth of products are sent to Canada annually. 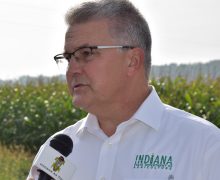 “And then when you look at exports to Mexico from Indiana, it’s over $160 million. Now, I really have to think if we had 2019 data that would be higher because, anecdotally, a lot of our companies are telling me that has improved. So, you look at that and let’s just say it’s something around, or probably north of, $1 billion for the state of Indiana agriculture that goes into those two countries.”

Kettler says Indiana has a very strong relationship with both countries, highlighted by recent travel to both Canada and Mexico.

“I believe they’re very strong. The Lieutenant Governor and I have been on trade missions to both of these countries, both Canada and Mexico, in the last year and a half. That was by design. Keeping in mind those were done before this agreement was finished and signed, part of the objective there was to let them know that we, from the state of Indiana perspective and our agriculture, we want to be able to maintain strong relationships.”

And the discussion from those trips has continued. Kettler told HAT that a delegation from Canada came to Indiana shortly after their trip to Canada and recently, “I had a conversation with the Deputy Minister in Manitoba, Canada. Just a conversation to say, ‘Hey! What do we need to be doing with our agreements that we signed?’ They’re always willing to talk and I think that’s a good sign that there’s a good relationship there.”

Kettler added that USMCA should be a great template for trade deals with other countries, especially as it relates to biotechnology.