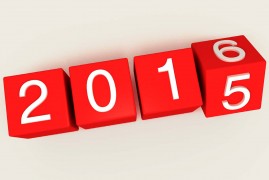 As we roll into the New Year, a quick look back over our shoulder shows some of the top stories in agriculture in 2015. The top story pick is an easy one: the weather. The floods that literally drowned corn and soybean fields in Indiana during the summer will be the event in 2015 that will be remembered. The weather made news in other parts of the country including the drought in California and the devastating winter storm that killed thousands of cattle in the Dakotas. Last week’s storm hit agriculture hard in Texas and New Mexico, and the Mississippi river remains closed to boat travel today because of flooding.

The top policy story for the year is the EPA historic land grab, known as the Waters of the US.  The EPA final rule on how much renewable fuel can be blended also ranked as one of the significant events in 2015.

At the beginning of 2015, the talk was all about drones in agriculture; and, late in the year, the FAA finally issued regulations on the use of drones

The retirement of Don Villwock as IFB president and the subsequent election of Randy Kron as new IFB president was the top state story in agriculture.

Merger mania made news in 2015, first as Monsanto tried a hostile takeover of Syngenta and then the merger of Dow and DuPont. There may be more of this in 2016 as Bayer and BASF are out shopping to buy an ag company or two.

The restaurant chain Chipotle made news again in 2015, but for a different reason. Instead of making news for slamming farmers, this time it got slammed in the media for the nationwide e-coli outbreaks in its kitchens that poisoned hundreds of people.

The 2015 Indiana State Fair certainly ranks as a top story for 2015 as it honored Indiana farmers. The Year of the Farmer theme helped many Hoosiers meet face to face with real producers and to learn a little about what life is like on Indiana farms of all kinds.

The top 10 most popular news stories from the HAT web site:

Looking forward to serving you with outstanding news coverage in 2016.