Weather was a big story, as it often is in farming. An exceedingly cold and wet spring delayed planting, replanting, and slowed crop development. “We have had 6 inches of rain in the past few days, and crop growth is very slow. Planting conditions are impossible,” DuPont Pioneer agronomist Lance Shepard told HAT in mid-May.

By mid-June, most of the crop was in the ground, but expectations on yield were not good. “I would expect to see yield average about 12 bushels below average,” said Purdue Ag Economist Chris Hurt. Yet the USDA shocked the farming world with a record high yield number in August and an even higher production number in September. And, when the combines began to roll, indeed the yields were amazing. The market kept waiting for yields to fall off, but it never happened. As a result, prices, especially for corn, continued to move lower. In the end, producers were surprised how well crops performed and at how low prices got.

Food and agriculture was the top story at the 2017 Indiana State Fair. ”Food is the No. 1 reason people come to the fair, so we decided to celebrate food and the farmers in the state who produce it,” said Cindy Hoye. While the Fair was another success, it was the first year Maury Williamson, founder of Pioneer Village, was not in attendance. His death in January was a loss for Indiana

agriculture, but his spirit and accomplishments live on in Pioneer village and in the lives he touched with his drive and passion for agriculture.

Indiana agriculture found itself in the national spotlight this year as Anne Hazlett and Ted McKinney took top positions at USDA. The Hoosier State also found itself being visited by President Trump, Ag Secretary Perdue, and EPA Administrator Pruitt — all wanting to talk about agriculture and meet with Indiana farmers. 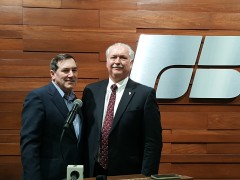 2017 was a year that we spent a lot of time talking about the Farm Bill. Listening sessions were held around the state by Indiana Farm Bureau and by Senator Joe Donnelly. The message given by Indiana farmers was “Keep crop insurance.” “That was the number one priority,” said IFB president Randy Kron.

The year saw the publication of a new strategic plan for Indiana Agriculture. A collaborative effort between ISDA and Most Indiana farm groups, the plan lays out a road map for where the state needs to grow the many sectors of agriculture. Economic development is a big part of that plan; and, during the year, several new economic development projects were announced, including a new Wal-Mart dairy processing facility.

Other key events in Indiana agriculture in 2017 included the rapid growth of the Indiana Grown program and the overhaul of the Indiana Grain Indemnity Fund as well as new research and educational facilities at Purdue in the areas of agronomy and livestock.

Farm policy developments centered around groups of letters like WOTUS, RFS, NAFTA, and TPP. WOTUS and TPP were withdrawn, and NAFTA is being renegotiated. The RFS saw some favorable rulings from EPA in 2017, something that has not been the case for the past 8 years. While little visible progress has been made on the Farm Bill, a lot has been done behind the scenes and hopes are high; the legislative process will begin in the first quarter of 2018.

It was an interesting year in ag technology with the launch of the first self-driving tractor, the all in one combine, and the self-cleaning grain bin. Artificial intelligence (AI) became part of the Climate Field View system. This allows a computer to start making recommendations on farming decisions and operations based on the data it collects. There were some problems with technology in 2017, most notably the misapplication of Dicamba products.

Stay with HAT for coverage of all the news in 2018.