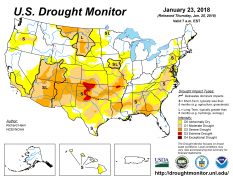 Last year, drought worries centered around the northern Plains and grazing conditions in the Dakotas and across Montana. Those areas remain dry, but the intensity has weakened, according to the latest U.S. Drought Monitor. Moving into 2018, drought intensity and area is spreading, extending over the Southwest, southern Plains and Great Plains, according to the American Farm Bureau Market Intel service. Parts of Texas have not seen any measurable precipitation for more than 100 days. A swath from northern Texas, extending into parts of the Oklahoma panhandle region, and further into southern Kansas, is rated in extreme drought, according to the monitor.

All of Oklahoma falls under a drought classification, with much of the state rated in moderate drought. The Monitor reports that agricultural impacts from the drought are being felt in Utah, Kansas and Oklahoma. Those impacts include decreasing hay and soybean yields, deteriorating wheat and grazing conditions, and decreasing water supplies as ponds and wells are going dry. Some of these effects started from moisture deficits dating back to the summer of 2017. Meanwhile, much of the Western Corn Belt is under some form of classified drought.