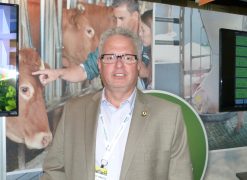 What if there was a way to show millennials who are so attached to technology a 360-degree look at what happens on a modern, sustainable farm? U.S. Farmer and Rancher Alliance’s SMART Farm concept is the way. It introduces the farm to those millennials and any consumer with a little bit of technology. Randy Krotz with USFRA says the term SMART Farm represents all the technology farmers use.

“Then we took it the next step and said we need to be able to deliver that to consumers so they’re experiencing the farm and seeing the technology that we use,” he explained. “So we’re creating a series of 360 videos, think of putting a headset on and being able to spin around look up and down and see in 360. The first one is a launch of a farrowing unit and a finishing unit for pigs.”

Krotz says they took the virtual reality glasses and video equipment for a launch two months ago at the South Beach Food and Wine Festival in Miami.

“It was an opportunity to literally be in front of tens of thousands of people with such great traffic, and of course people aren’t used to seeing agriculture in an event like that. So that’s the real opportunity that USFRA tries to work on all the time, taking farmers and ranchers places where agriculture doesn’t normally show up.”

Visitors experienced being in a farrowing unit, able to look down at baby pigs, witness the air control, the care all the pigs receive, and the obvious emphasis on keeping hogs healthy. There was some very positive response, according to Krotz, including it looks like a pig spa.

“But the best reaction we got over and over was ‘I feel better about eating meat.’ I think that was because they saw how well animals were cared for. There’s no question we got negative reactions too, we did, not after they watched the video but people who just didn’t want anything to do with modern agriculture. We didn’t let those people go, we tried to talk to them, but obviously you can’t change everybody’s mind.”

Krotz says they’ll try to take the setup to about 25 events this year, but the video is also available on YouTube. If you don’t have the glasses be sure to click the rotation arrows in the upper left hand corner of the video.