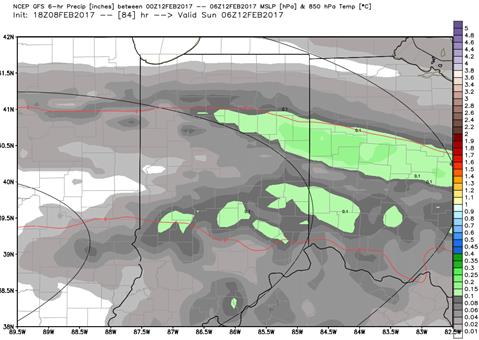 High pressure begins a dominating run over the state today, pushing in from the NW. Cold air that began its move yesterday will complete it today with temps normal to a bit below normal or this time of year. However, while this is likely the coldest day of the week, the cold air dome is pretty shallow and fast moving. That means we see temps start to rise tomorrow, and that rise continues into the weekend, with much above normal temps. Strong south winds up the backside of the high will facilitate that move to much warmer air.

A warm front lifts across the state from southwest to northeast overnight Saturday night into Sunday. That will trigger some scattered showers with rain totals from a few hundredths up to .2”. Then, later on Sunday, we have a cold front sweeping through that can add another few hundredths to a quarter of an inch. That will bring rain totals for the entire system to .1”-.4” with coverage at around 80% of the state. Those moisture totals are not that impressive, and should not cause major problems. The above map is a snapshot of action around midnight Saturday night, as the warm front is on the move north.

Cold air returns behind the front early next week, but temps move back to above normal levels by late Tuesday and stay there through the balance of the week. WE will be dry from next Monday right on through the following weekend. A strong system will pass by Wednesday into Thursday well to our south, over the TN valley…but we will not see any inclement weather up in Indiana.

In the extended window, we still are watching the potential for a cold front around the 20th, but models are suggesting a much stronger circulation for the 22nd into the 23rd, which may rob the earlier system of moisture and energy. Both need to be watched at this time. Temps will be well above normal in the extended period, as it is looking much more likely that we see a strong upper level ridge expand out of the plains and across the eastern part of the country. That may make a strong circulation around the 22nd act more like a spring system than a winter one.