Our active pattern continues across the state, but we have a few tweaks to the precipitation outlook this morning. Timing is a little sooner on our next system this week, and precipitation may not be quite as heavy early next week from our system there. However, we have two more showing up in the extended period, and with their current strength and scope…we think we are looking at a very wet start to the 2017 planting season over the state. 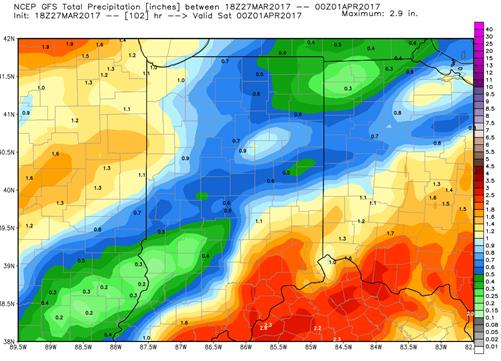 Let’s start nearby. We are dealing with a few lingering showers, spits and sprinkles early this morning as a little wave of moisture exits to the east. This wave brought the moisture in late yesterday afternoon and promoted a very scattered batch of rain. WE should dry out later today and sun should break through. That dry period extends through tomorrow, although clouds likely start to develop later tomorrow afternoon. Temps should be normal to above normal over the state.

As clouds build tomorrow night, we will see rain start to push in over NW Indiana after midnight and into Thursday morning. That rain develops and spreads south and east, and the rain will continue through Friday. That start is about 12-18 hours sooner than our earlier forecasts, but it should be out of here by sunset Friday night, so we really do not see any extension on the duration of the event. Rain totals will be from .25”-1” with coverage at 80% of the state. The remaining 20% likely sees rain, but may have trouble getting up to that .25” lower threshold. The map above shows rain totals through Friday night. These may be a little overzealous, but not by an exceptional margin.

Dry for the weekend! WE should see sunshine return for Saturday and most of Sunday with temps still normal to above. In fact, we see no major cold air outbreaks over the coming 2 weeks, so any concern about “cold” should be non-existent. Clouds start to thicken up some later Sunday afternoon.

Our next front moves in Monday and rain slowly works across the area through Wednesday morning. This will be a slow progressing system. Rains start in southern Indiana, mostly south of I-70, but will expand Monday afternoon to include most of the state. Two-and-a-half-day rain totals will be from .25”-1” with coverage again at 80% of the state. If you have been watching our forecasts, you will know that this is a decrease in total precipitation for this event by a significant factor. However, this still will be ample rain drawn out over the period, and basically just reduces threat of flooding we had feared. This is a slightly smaller coverage area too.

The forecast gets a little dicey for the second half of next week. We look for a dry finish to Wednesday, but Thursday may be up in the air a bit. One model suggests another quick moving front sweeping through for Thursday the 6th, while the other keeps Thursday dry. Stay tuned. Our thoughts are that the pattern we find ourselves in is one of 24-48 hour breaks in-between systems, and that flow pattern likely holds…but time will tell. In any case, we have a strong low with plenty of severe weather potential in the early part of the extended period, around the 7th into the 8th. Rain totals can easily be form .5”-1.5” with coverage at nearly 100%. Severe weather looks to be a good bet here.

Finally, toward the end of the 16-day window we have another front and low pressure circulation arriving around the 11th with .25”-.75” rain potential over 80% of the state.

So, for those keeping track at home, that means between now and April 12th, we have the potential for 4, and maybe 5 systems over the state bringing a total of roughly 1-5 inches of rain. That is one soggy forecast. And, if the rains were not interesting enough…remember, we have no more than a day or two of dryness in-between systems either. This means, with an overall damp feel, we will not be evaporating out much of the moisture that falls between now and mid-April. Given the rains of this past weekend and last night…you can be assured that only a lucky few, on mostly sand soils will be playing in the dirt before mid-April…and even those few might be tempting fate!