A little bit of moisture to start the week this week as a minor frontal complex works through today and tomorrow. Moisture from this boundary will come in a couple of waves, but (and we answer this question before anyone asks…too late, some already did last week) this moisture today and tomorrow have absolutely nothing to do with the remains of Hurricane Harvey, that continues to make life miserable down south. This is just a regular run of the mill frontal complex that will bring combined rain totals over the next 2 days of .25”-1.25” over 80% coverage area. There looks to be a slightly better chance for heavier rains over central and southern Indiana, but that may be trying to finesse the forecast too much. We do still think that it will take some decent thunderstorm action to get to the high end of the rain total range. The map above shows cumulative rain potential through midnight tomorrow. 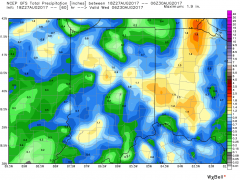 We begin to dry down midday Wednesday, and we should then try and stay dry through the balance of the week and through midweek next week. There can be 2 hiccups to watch, though. The first comes Thursday midday and afternoon, as a weak, sagging cold front boundary looks like it may want to come just a bit farther south, and bring a few showers into extreme northern Indiana. WE will keep an eye out for a few hundredths to a tenth or two over areas of the state north of US 30. Farther south, we likely see nothing. Then, hiccup number two will come as the remains of Harvey finally pass by, mostly south of the OH River Friday night into Saturday. This may throw some clouds up into extreme southern Indiana, and we won’t rule out a few showers in the counties right along the river. However, most of the region stays rain free, and we in no way see a direct hit with any of the remains of Harvey late this week.

That leaves the rest of the state and the rest of the period completely dry. we should see a very nice Labor Day holiday weekend, including the holiday itself next Monday. Our next front is looking to wait until solidly into the 11-15 day period to develop. We will be watching the period around the 7th for a strong front with half to 1” rain potential and 80% coverage. Then, another front tries to develop around the 12th, but looks much smaller, and its precipitation much more scattered.

Temps through the upcoming period will have a bias toward above normal. Temps today and tomorrow may stay down due to rains passing through, but warmer air surging across the plains likely makes a run in here later this week, through the weekend and into next, with south flow dominating through the period.