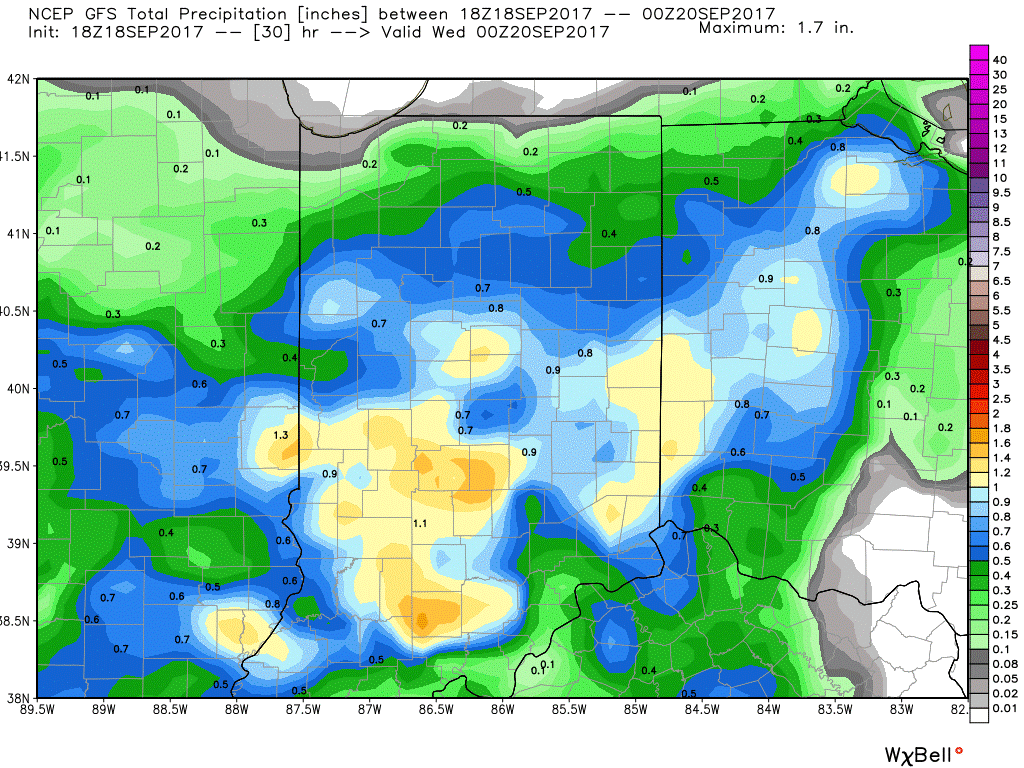 Scattered showers move across the state today as the second wave of moisture moves through right on through this afternoon and evening. We could see some better moisture today in spots, but will still be looking at about 60-70% coverage across the state. We are putting rain totals in at .1” to 1”. The best rains this morning will be over northern and western areas, and action will slowly drift east and south as the day progresses.  The map above shows cumulative rain by early tomorrow morning.

Drier weather is on the way starting tomorrow, although clouds will probably linger over a large part of the state. Temps do not really fall off that much behind the front, and we expect some good warming later on…as we will get to in a bit. Dry, warm air is in for the balance of the week, the weekend and a good chunk of next week. Our next front is dying as it moves close at midweek next week. While rains out west look promising and can be up to .75” in the western corn belt, here, we think a few hundredths to at most a quarter of an inch with 50% coverage next Wednesday might be the best we can do. This looks like a rather dry pattern emerging.

If we get very little rain next Wednesday, we then look set to be dry through the end of the month and into early October. Our next front in the extended period looks to arrive sometime closer to the 4th. However, that front also looks better out west and will be moving into an area dominated by an upper level high and ridge. That will take a lot of punch out of the front. We still are talking up some .1”-.5” rains there in early October but will need some help from that high weakening sooner and push east faster.

A quick note on the Tropics. Jose likely still tries to interact with the New England and Mid Atlantic coasts over the next 2-3 days. Maria is on track to hammer the Caribbean. The track from there is still up in the air. But there is more concern this morning about a westward push than there was 48 hours ago. Remember Irma made her way all the way into the eastern Corn Belt before raining herself out. We need to watch where Maria wants to go to gauge if there will be any rain enhancement later in the extended period. Right now, we still think she curves and heads out to sea…but we all know these storm tracks are highly changeable this far out from the US mainland.