A frontal boundary takes its own sweet time moving over the state through the balance of the week, and it will have several waves of moisture that move along its boundary during that period. Scattered showers actually will be around today, mostly over the northern half of the state. Rain totals will be from a few hundredths up to half an inch. We like coverage at 60% of the area from I-70 northward. Today’s action will be rather hit and miss, as the first batch of rain will actually have to do a lot of work just moistening up the atmospheric profile. 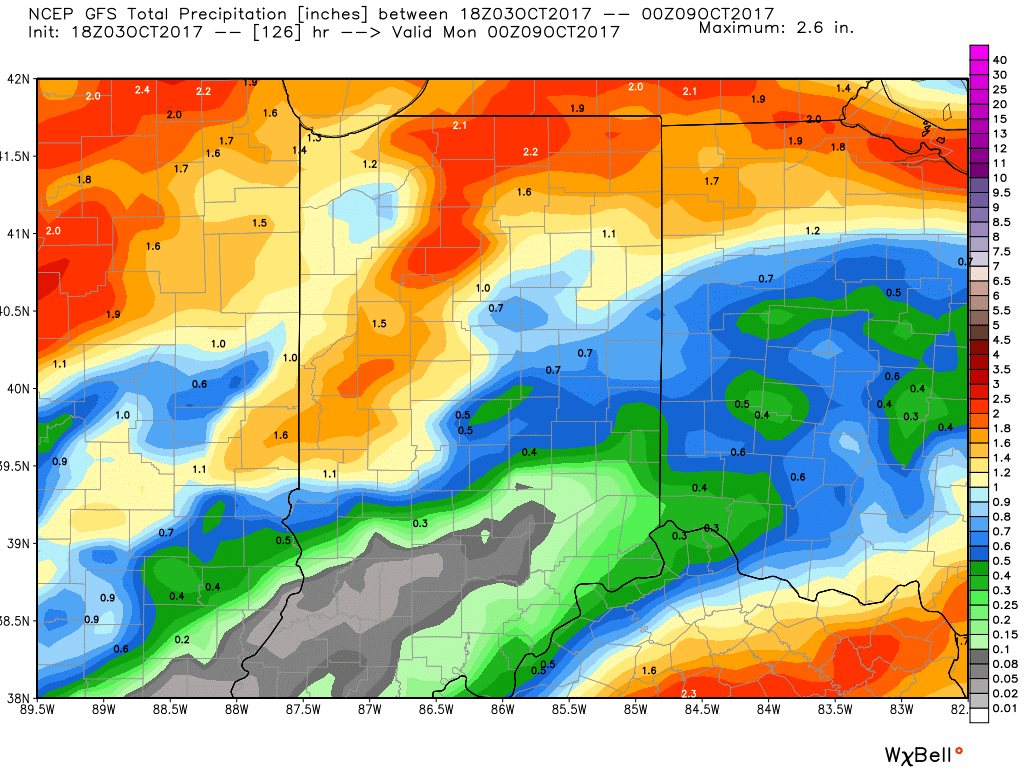 Tomorrow, we start the day again with just some scattered showers, but see much stronger rains and thunderstorms develop tomorrow night. Through the daylight hours, we would not be surprised to see some good dry windows interspersed with the showers and rain totals of a few hundredths to a third of an inch. Coverage during the day may be only around 40%. However, as we just mentioned, much stronger action comes in overnight tomorrow night and goes right on into the first half of Friday. Rains here can be from .25”-1” or more, fueled by strong thunderstorms, especially over the northern part of the state. This action tries to wind down Friday afternoon. Finally we see another wave of action in for Saturday, with rain totals of .25”-.75” over about 60% of the state. Probably the best way to look at this forecast is to step back and look at combined totals for the entire event. So, from today through the weekend, we put rain totals at half to 1.5” over about 75% of the state. The southern quarter of the state may be where we see the least rain, particularly SW Indiana. We won’t completely rule out rain anywhere, but that southern Indiana area may be the one that has trouble getting up to that half inch minimum threshold of the range. The map above shows potential cumulative rains through Sunday night. We think the 2”+ totals are way over done on this particular model, but the distribution of the precipitation is spot on, in our opinion.

We are not done with the rain there. One more separate trough needs to work through early next week. However, this wave is going to be delayed just a bit, now arriving overnight Monday night and having its best precipitation for the first half of Tuesday. We do have some good news, though: this system has much, much less moisture than previously seen, and we likely see only a .05”-.25” rains over about 60% of the state. There is no thunderstorm threat anymore, likely because of cooler air coming in behind the last front leaving this weekend. So, that’s good news.

The balance of next week is sunny and dry, and we should see that hold right on through the 16th. This should be a good drying window, with excellent evaporation rates and temps that stay near normal. We do not look for major below normal temperature pushes in this period. However, remember, we lose the most heat through the month of October over any other month during the year…meaning normal highs at the end of the month are significantly below the normal to start the month. That means, even though we don’t expect major cold, temps still are going to be on their way down from here on out.

Our next system we see in the extended window is on track for arrival around the 17th and 18th. It does have significant rains with it, perhaps over an inch, with coverage right now at 80%. So, it is a system to watch, even though it is out toward the end of the 11-16 day forecast window.

Overall, as these rains unfold over the state the rest of this week and weekend, we will be looking at our first significant delays of this harvest season. However, even with rain expected in some way, shape or form potentially 5 of the next 7 days, a good 7 days of dryness behind the rain means we should be able to ramp harvest back up next week with relative ease.