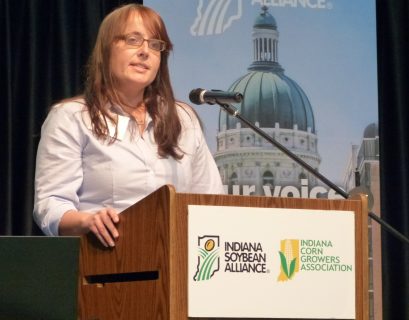 Over the summer, the overwhelming belief was that harvest would come early (which it did) and that harvest could go quickly (which it hasn’t for many). USDA’s Crop Progress Report says 95% of Indiana corn and soybeans have been harvested. Indiana Corn Growers Association President Sarah Delbecq from Northeast Indiana’s Dekalb County is one of those farmers in the 5%.

“I’d say we’ve got 20% or so to go but we’ve got some of both crops, corn and beans, that are out. At this point, it’s just strategizing on what’s our best approach for getting through this tough situation as smoothly as we can.”

Delbecq says they could use a week of decent harvest conditions to finish things up. Unfortunately, for those like Delbecq, HAT Chief Meteorologist Ryan Martin’s Indiana Farm Forecast does not look promising to complete harvest for the foreseeable future. The late harvest also comes with some logistical issues.

“Are we going to have to dry soybeans? That’s not something that we normally try to do. How does that work while we’re also trying to simultaneously dry corn with bin storage and logistics for jumping back and forth between those two? So, there are just some things to figure out. We don’t want to create a bigger problem as the finish line is sort of in sight. We’d like to just finish it off as painlessly as we can if that’s possible.”

Like last year, a wet spring caused planting delays in much of Northern Indiana, including Delbecq’s farm. She says one difference between last year and this year is that corn has been drier.

“Last year at the end of November, we were still dealing with corn that was 28% moisture. We went through a fair amount of propane last year just to get what was a big crop dried down to the point that we could stick it in the bin. So, this year’s been easier on that front.”

Many growers have told us about their record yields this year in corn and soybeans. Delbecq said they weren’t at record yields but definitely above average.