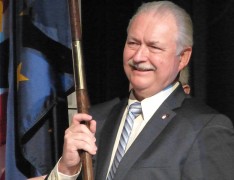 At the 2016 Farm Bureau annual meeting president Bob Stallman is saying goodbye, Indiana Farm Bureau’s Don Villwock finds out what exactly he’ll be doing after retiring from the top spot in Indiana, and Hoosier’s new Farm Bureau leader Randy Kron walked the national stage Sunday morning carrying the Indiana flag for the first time during the parade of state presidents.

“Very proud to be able to represent Indiana agriculture,” he said. “It was a proud moment. It’s kind of humbling too to realize what you’re representing here when you think about agriculture in Indiana and the diversity in what we have. It makes me Farm Bureau proud.”

Following the opening general session and final address from Stallman Kron spoke with HAT about the meat and potatoes of Farm Bureau, the Tuesday delegate sessions. 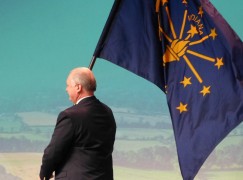 “We’ll have the discussion about what positions American Farm Bureau is going to have, what we’re going to work on for the next year. That’s the meat and potatoes of the convention. All of this other is great, celebrating agriculture, but it’s about the policy.”

In his address the retiring Stallman made it clear that the strength of Farm Bureau is its members, and their time, effort and treasure. Kron said that those members continue to drive policy.

“I think he emphasized quite a bit that it’s about member engagement. The foundation of this organization is our grass roots members. That’s how we get things done. That gives us our clout whether it’s at the statehouse or our nation’s capital. It’s our grassroots members working, talking and telling their story about agriculture.”

And grass roots membership allows the organization to work hard on issues like the Waters of the U.S. rule, a Farm Bureau priority.

“I think it’s going to be continual,” Kron said about the WOTUS fight. “You know, we’re in the courts. We’re trying to stop it or slow it down at least, trying to pass some legislation. You’re going to see a full court press on Waters of the U.S. trying to stop it because farmers aren’t opposed to reasonable rules. But that one is not a reasonable rule. It will change the way we farm and it’s not right

Tuesday is a big day as the meeting wraps up, culminating in the afternoon with the vote for the new president. Along with retired Indiana president Villwock, Zippy Duvall of Georgia, Arizona’s Kevin Rogers and Barry Bushue from Oregon are running for the AFBF top spot.