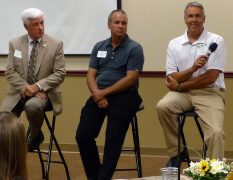 Stan Poe of Franklin and Larry Holscher from Vincennes are part of the Indiana Master Farmer family since being officially welcomed in late June. They join the Kretzmeiers, Denny Bell, and Honorary Master Farmer Lonnie Mason, a nearly 5-decade long Purdue Extension educator.

Holscher spoke with HAT just before the award ceremony in Delphi. The Master Farmer designation means a lot to him.

“Honestly in the world of ag, there’s really not another and equivalent type of award,” he said. “It’s something that people in the community are aware of and I’m just honored and humbled by it.”

It’s a fifth-generation farm, including his three sons, and it continues to evolve over time.

Stan Poe is a farmer who has seen continual changes in agriculture during his 60+ years. He has embraced technology and encourages everyone to do the same.

“We have gone so far in the crop side of the business as well as livestock genetics,” Poe told HAT. “It’s phenomenal to me, and I tell young groups of FFA and 4-H’ers as I talk to them, you’re entering in to agriculture at a dynamic time. Study hard, pay attention to detail, stay up on technology.”

Indiana Prairie Farmer and the Purdue University College of Agriculture present the Master Farmer awards each year. The first Master Farmers were honored in 1925.