Scattered rain showers provided enough moisture to alleviate stress to crops in many areas, according to Greg Matli, Indiana State Statistician for the USDA’s National Agricultural Statistics Service. Farmers continued irrigating fields during the week due to high temperatures and variability in rain coverage. Farmers are concerned about the affect high temperatures may have on pollination. Statewide average temperature was 78.8 degrees, above normal by 3.3 degrees. Statewide precipitation was 1.54 inches, above normal by 0.48 inches. There were 5.0 days available for fieldwork for the week ending July 24, unchanged from the previous week.

Winter wheat harvest reached completion. Farmers are reporting above average yields. There were opportunities to bale hay, and the rain is expected to help regrowth. Livestock were under stress the latter part of the week during the heat advisory period. Other activities this week included crop dusting, harvesting oats, mint and vegetables, spraying fungicides on corn, mowing roadsides and attending fairs. 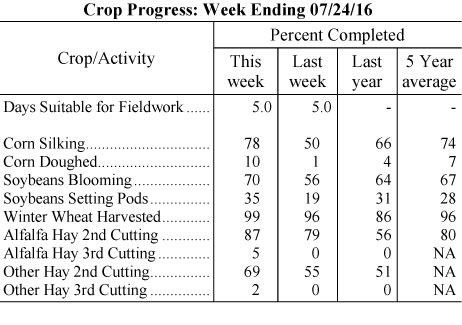 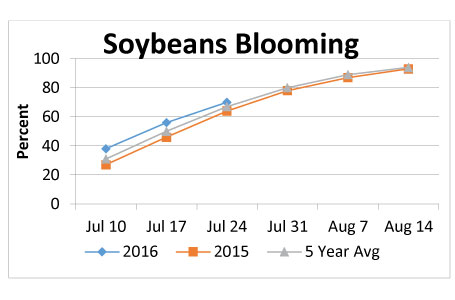