President Barack Obama is in Cuba, an historic visit that is the first by a sitting U.S. President since Calvin Coolidge in 1928. The hope is the visit will help improve the U.S.-Cuba business climate, but that won’t happen yet for agriculture, according to the American Farm Bureau. Farm Bureau trade adviser Dave Salmonsen says Obama’s Cuba visit is a big symbol for improving trade with Cuba but the bigger issue is with Congress.

“The issues of course that inhibit full agricultural trade with Cuba are tied up with the embargo with the lack of having direct financing, banking relationships, some of which is attempting to be addressed with some regulations but really can’t open fully until the embargo is gone.”

For now, Salmonsen says the President’s visit sets the tone by improving people-to-people contact, opening the door for more travel and U.S. investment in Cuba.

“I think with the trip showing several members of Congress going, cabinet secretaries including Agriculture Secretary (Tom) Vilsack, I think that’s all pointing to the fact that there is a potential here for U.S. businesses of all kind, including agriculture, to do more with Cuba.”

The Treasury Department years ago lifted ‘cash-in-advance’ restriction on agriculture sales to Cuba and ag equipment, seeds and food processing are now exempt from financing restrictions.

However, Congress is mired in election year politics with Cuban-American lawmakers, including GOP Presidential candidate Ted Cruz and former candidate Marco Rubio opposing the Cuba visit and lifting of the embargo.

Salmonson says the President’s trip this week keeps the embargo “front and center” as Farm Bureau and other agriculture groups continue their long campaign to fully normalize U.S.-Cuba relations. 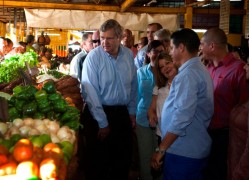 Secretary Vilsack held a bilateral meeting Monday with Cuban Minster of Agriculture Gustavo Rodriguez Rollero and they signed a Memorandum of Understanding that establishes a framework for sharing ideas and research between the two countries.

And there was good news Monday for checkoff groups that learned they can promote in Cuba. Vilsack announced that USDA will allow the 22 industry-funded Research and Promotion Programs and 18 Marketing Order organizations to conduct authorized research and information exchange activities with Cuba. These groups, which are responsible for creating bonds with consumers and businesses around the world in support of U.S. agriculture, will be able to engage in cooperative research and information exchanges with Cuba about agricultural productivity, food security and sustainable natural resource management. Secretary Vilsack says this is “a significant step forward in strengthening our bond and broadening agricultural trade between the United States and Cuba.”

In 2014, Cuba imported over $2 billion in agricultural products including $300 million from the United States. However, from 2014 to 2015, U.S. agricultural exports to Cuba fell 48 percent to $148.9 million, the lowest since 2002, giving the United States just a 10 percent market share as Cuba’s fourth largest agricultural supplier, behind the EU, Brazil, and Argentina.