AFBF Ready to Take on Farm Bill and Other issues

The AFBF annual meeting concluded with adoption of policy on the Farm Bill, immigration, and regulatory reform.  President Zippy Duvall said they are ready to work with Congress to begin work on a new Farm Bill. Duvall said they will allow the chairman of the House and Senate Ag committees to set the pace and direction of Farm Bill negotiations, “We will be ready to be a resource when the process begins.”

In his final press conference of the convention, Duval said other key elements of the final Farm Bill policy book are immigration  and regulatory reform. He said there was unity in policy recommendation. “The actions taken today by our farmer and rancher delegates from across the nation represent the culmination of our year-long grassroots policy process,” said Duvall. “It also provides us a roadmap for actions AFBF will take to implement our policies throughout this year, and I am optimistic about those prospects.”

Duvall revealed that last week top Farm Bureau leaders along with members of other key farm organizations met with Trump officials to explain their concerns on key issues.

Regulatory Reform
Delegates approved policy supporting regulatory reform, including legislation to eliminate “judicial deference,” which has essentially nullified the power of the courts to serve as a check on agency abuses.

Also on the topic of regulations, delegates approved policy to oppose agency advocacy campaigns in support of their own proposed regulations.

Delegates passed a sense-of-the-body resolution calling for comprehensive regulatory reform, driving home the importance of the issue for farmers and ranchers. 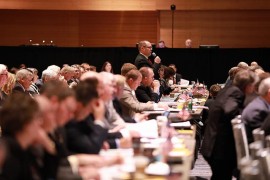 New language was approved to require the Bureau of Land Management, U.S. Forest Service, U.S. Fish and Wildlife Service, and other federal agencies to coordinate and cooperate in a meaningful way with state and local governments in making land management plans and decisions as required by Congress. They also supported mandatory recusal for federal officers who face conflicts of interest in their work.

Delegates also called on Congress to support incorporating all types of domestic fruits and vegetables into the Fresh Fruit and Vegetable Program for schools. Delegates supported the use of fresh and locally grown produce when available.

Delegates reaffirmed support for flexibility in the H-2A program which would allow workers to seek employment from more than one farmer.