AFBF Says WOTUS Must Go, But Then What? 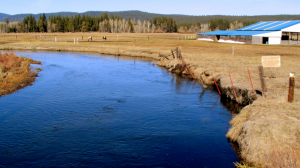 Unity was the theme of the AFBF annual meeting this week in Phoenix.  While there are some divergent opinions on some farm issues, one that brought all Farm Bureau members together is Waters of the U.S.  The message from farmers to the new Trump White House is that WOTUS must go.

But simply withdrawing the WOTUS rule is not enough, says AFBF senior director of regulatory relations Don Parrish. He says the rule must be withdrawn and replaced, “The overreaching regulation of the Obama administration has to go away. But we also have to put a regulation back in place that respects the cooperative federalism foundation of the Clean Water Act, where there is a clear line between what is federal and what is state. All water is regulated, so it’s going to be important for this process to be transparent.”

When it comes to replacing what has been called the biggest land grab in history, farmers must be at the table along with many other groups, “You’re going to see a lot of people at the state level and the local level. They want their voices heard because ultimately how this impacts not only farmers and ranchers, but state law, state regulations – all of that’s going to need to be heard and clearly it’s going to be complex. But, at the end of the day, we can do it in such a way that we protect water quality, but we don’t need such an overreaching regulation that is influencing land use.”

Parrish says farmers have a great track record of working to improve water quality. This should serve as a guide for future regulations, “Their track record of trying to improve their resource, trying to make their farms better today than it was yesterday, is clearly something that should funnel in to any decision that we do in the regulatory arena; and I think it funnels in to any understanding of regulatory relief we need, not only from Washington, but out there on the ground as it impacts farmers and ranchers.”

Meanwhile, Indiana Senator Todd Young is working on legislation to prevent this kind of federal regulatory overreach from happening again in the future. Young authored a bill as a member of the House, before winning a Senate seat in the recent election. The Regulations from the Executive in Need of Scrutiny (REINS) Act passed the House last week on a 237-187 vote. One amendment to the bill would require agencies to repeal existing rules to offset any expected costs of new rules. Another amendment would peg the $100 million impact number to inflation. Senator Rand Paul joined 23 other Senators in introducing a similar bill in the Senate, but Democrats are expected to block the bill there.