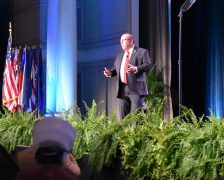 The 2018 American Farm Bureau Federation Annual Convention attendees heard from their president Sunday during Zippy Duvall’s annual address, and a day before the President of the United States takes that same stage. Duvall spoke of ag issues like trade, farm labor and immigration and the 2018 farm bill. He would like for the bill to be known differently than a farmer safety net.

“I think we gotta call it what it is,” he said, “and it is a food security bill. See, the farm bill is a place where all Americans, in and outside of agriculture can make a very small deposit and invest in the security of their food system. But as important as the farm bill is to overall food security, it is critical to the sustainability of our farms and our ranches.”

After the Duvall speech Indiana Farm Bureau President Randy Kron told HAT he agrees with the idea of shifting the language. 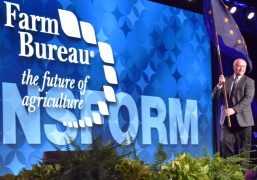 Kron will be in the audience when President Trump speaks in Nashville and is anxious to hear about NAFTA and whether the President “get’s it” the same way his USDA Secretary does.

“I want to hear what he has to say because I’ve had some meetings and a lunch with Secretary Perdue and I think he really gets it. And he’s working hard to make sure President Trump understands the importance of NAFTA to agriculture. Sometimes we take things for granted and we have to realize what negative impact it could have if we don’t trade with our neighbors.” 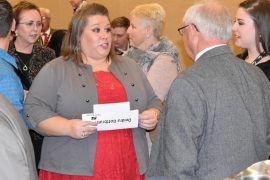 In other Indiana Farm Bureau member news, over the weekend Deidra Gottbrath of Washington County advanced to the Sweet 16 round of the Young Farmers and Ranchers Discussion Meet but did not make it to the final round. Excellence in Agriculture winner Jeff Demerly of White County advanced to that competition’s top ten.