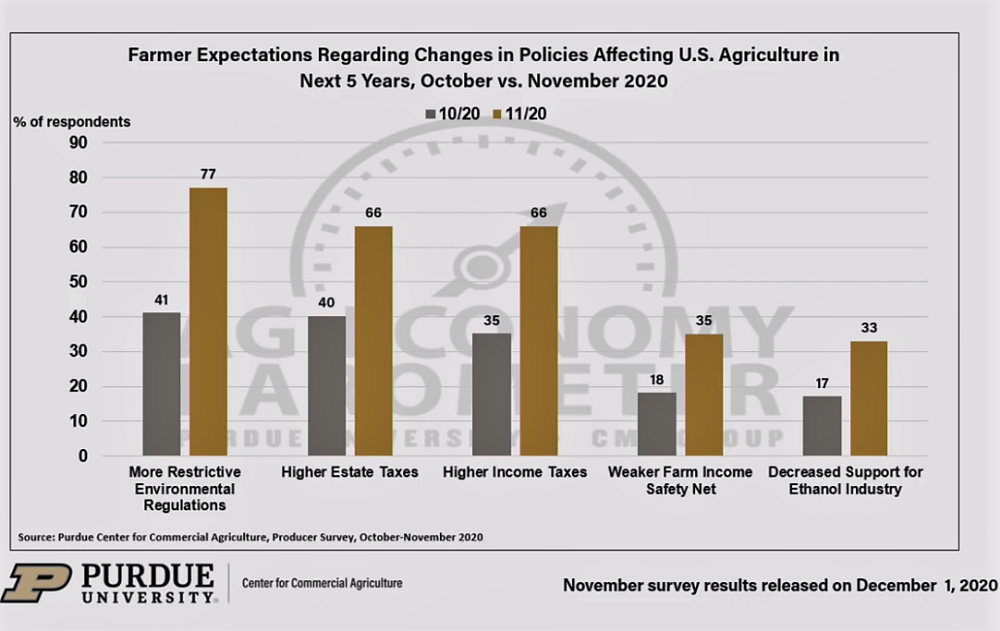 After hitting an all-time high in the October Purdue University and CME Group Ag Economy Barometer, there was a good chance of a setback. The new barometer did drop by 16 points for a reading of 167 in November, and though that represents a decline in farmer sentiment it is still high historically.

The Index of Future Expectations fell 30 points in November. Jim Mintert, the barometer’s principal investigator, said producers were asked questions for the October and November reports, before and after the presidential election. Their concern for the future likely drove this report’s decline.

“Across the board, farmers told us they expected to see more restrictive environmental regulations, higher taxes, a weaker farm income safety net, and reduced support for the ethanol industry in November, compared to what they thought was likely in October. The change in farmers’ perspectives probably helps explain the decline that we saw in the Index of Future Expectations this month,” said Mintert, the director of Purdue University’s Center for Commercial Agriculture.

Also, on the November survey, 44% said they think it’s likely that China will fulfill the Phase One Trade Agreement requirements. That number is down 15% from the prior month. The survey period was November 9-13, after the U.S. election.

The Index of Current Conditions rose 9 points in November to reach a new high, so unlike the future concerns, the current commodity price rally and CFAP-2 payments are supporting the farmer’s view of the current economy.

The Ag Economy Barometer is calculated each month from 400 U.S. agricultural producers’ responses in a telephone survey. This month’s survey was conducted Nov. 9-13, after the U.S. election.