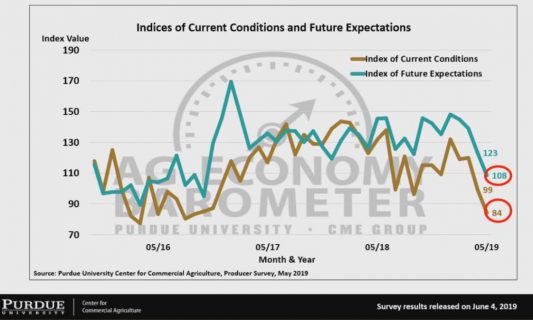 Farmer optimism about the economy has been falling in recent months, mainly from ongoing trade disputes, very late planting and low commodity prices, and now it has dropped to a level not seen since the month before the November presidential election in 2016. The Purdue University/CME Group Ag Economy Barometer was 14 points lower in May.

“Fifty-five percent of the respondents said they expect to see wealth decline in the next 12 months,” he said. “That compares to 39 percent back in February and 35 percent a year ago. So, farmers have become significantly more negative with respect to income and what’s likely to take place with regard to their wealth.”

That coincides with weakness in the Large Farm Investment Index, which measures producers’ attitudes toward making large investments in their farming operation.

“That decline again from a value of 48 a month ago to 37 in May, and that’s the lowest reading we’ve had for that Large Farm Investment Index since we started collecting data in the fall of 2015, as farmers pull back on making capital expenditures on their farming operations.”

Those surveyed also continue to lose optimism about future farmland values and a resolution to the trade dispute with China by July first this year.

The May barometer reading was 101, down from 115 in April and it has dropped 42 since the start of the year. Four hundred agricultural producers across the U.S. were surveyed in mid-May, prior to USDA’s trade mitigation package announcement and at a point where corn and soybean prices were just starting to climb but around a half dollar below where those prices are now.

The May Ag Economy Barometer report is online here.