Agricultural producer sentiment rebounded in October, according to the Purdue University/CME Group Ag Economy Barometer. The October barometer reading of 136 was 22 points higher than September, which was the lowest reading for the survey since 2016. The barometer is based on a survey of 400 agricultural producers from across the country.

The sentiment improved as producers became more optimistic about current conditions and, especially, future conditions. The barometer’s two sub-indices both increased in October; the Index of Current Conditions rose 19 points to 115 and the Index of Expectations rose 24 points to a reading of 146. 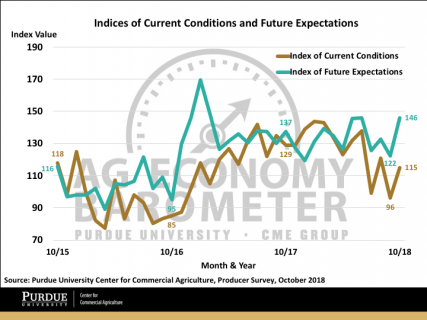 “We continue to see large month-to-month variations in the barometer readings as a result of swings in major commodity prices and emerging news about trade negotiations with key ag trade partners,” said James Mintert, the barometer’s principal investigator and director of Purdue University’s Center for Commercial Agriculture. 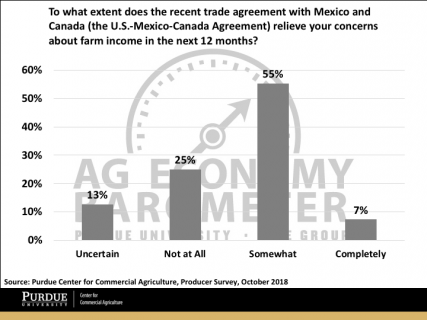 The Trump Administration announced the renegotiated U.S.-Mexico-Canada Agreement in early October. To better understand producers’ views, the survey asked whether they believed the agreement would relieve their concerns over farm income in the next 12 months. While just over 60 percent of producers said the agreement would at least somewhat relieve their farm income concerns, 25 percent of producers said it would not.

Respondents were also optimistic about crop prices for the upcoming year. The October survey asked producers about their expectations for corn, soybean, wheat and cotton prices in the next 12 months. In each case, more producers said they expect to see higher prices. For corn, soybeans and wheat, the ratio of producers expecting higher prices to those expecting lower prices was just over 3 to 1. 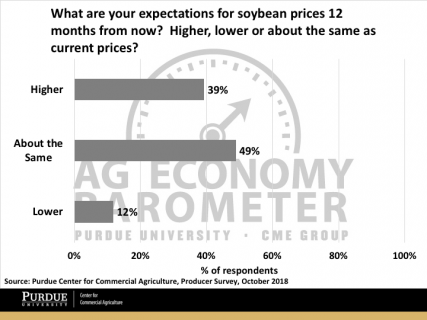 To learn whether this year’s sharp decline in soybean prices is affecting producers’ 2019 soybean planting intentions, farmers who planted soybeans in 2018 were asked whether they intended to maintain that same acreage in 2019. Of those respondents, 77 percent said their acreage would remain unchanged. However, one in five soybean growers said they planned to reduce soybean acreage in 2019. Among those who plan to reduce their acreage, two-thirds said they plan to reduce their 2019 soybean acreage by more than 10 percent.

Read the full October Ag Economy Barometer report at https://purdue.edu/agbarometer. This month’s report includes additional information on producers’ views on farmland values and their intentions to make large farm investments. Additional October barometer analysis can also be found in a video from Minter at https://youtu.be/c9zMBggrAmk.