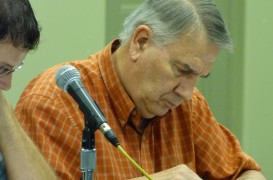 With grain prices in the tank, the number one question for the corn crop coming out of the field right now is “What is the best marketing strategy?” Purdue Ag economist Chris Hurt is one of the experts suggesting storing the crop for now.

“With on farm storage you only have about a penny a bushel in interest cost to store that, and if you can pick up something from 50 to 60 cents a bushel into the spring with about 10 cents, that makes those revenues not so bad.”

Producers are wondering what it will take to get the price of corn over four dollars. Hurt says it could happen, but it will take something big to move the market like that.

“I think it takes some kind of a weather event,” Hurt said, “and that weather event could obviously be South America or that could be January, February during the growing season if they had some adversity there.”

Hurt says one of the most important factors will continue to be global demand. Last week’s HAT-Pioneer poll question asked if farmers plan to sell any portion of their crop at harvest, and about two-thirds responded said yes they do.