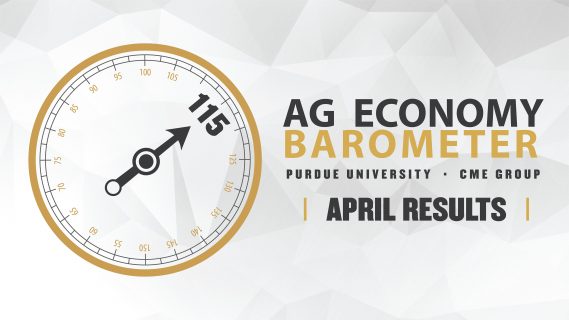 In April, agricultural producer sentiment plunged as the Purdue University/CME Group Ag Economy Barometer declined 18 points to a reading of 115, down from 133 in March. The barometer, a sentiment index, is based on a monthly survey of 400 agricultural producers across the U.S. This marks the fourth largest one-month drop since data collection began in October 2015.

“Farmers are becoming increasingly anxious over their future financial performance,” said James Mintert, the barometer’s principal investigator and director of Purdue University’s Center for Commercial Agriculture. “Producers have taken stock of their financial position and prospects for 2019 as they head into planting season and are concerned about the uncertainty arising from the ongoing trade disputes with key ag trading partners. Right now it seems that producers are being cautious.”

That caution is seen in producers’ attitudes toward making large investments in their farming operation. In the April survey, when asked whether they feel now is a “good time” or “bad time” to make large farm investments, only 22 percent of farmers stated it was a “good time” while 74 percent stated it was a “bad time.” That combination pushed the Large Farm Investment Index down 9 points compared with March.

Producers also expressed less optimism regarding prospects for resolution of the ongoing soybean trade dispute with China. On the April survey, only 28 percent of respondents felt that the dispute would be resolved before July 1, down from 45 percent in March. However, 71 percent still feel the dispute will ultimately be resolved in a way that benefits U.S. agriculture. In a separate question, when asked whether they felt that the U.S. should rejoin the Trans-Pacific Partnership (TPP), 47 percent were favorable, 28 percent were not in favor, and 25 percent stated they were uncertain.

Since January, more survey respondents are indicating they have concerns about commodity prices. As a result, Purdue researchers asked additional questions related to commodity prices in order to understand producers’ perspectives on the future direction of corn and soybean futures prices. For the past four months, those results have been compared with futures and options market-based probability estimates to determine whether there is a significant difference in sentiment between the producers and futures and options market participants. Early findings indicate producers have consistently had a more negative outlook compared to those who participate directly in the futures and options markets. Moreover, producers became relatively less optimistic over the course of the winter and early spring. This increasingly pessimistic view of corn and soybean prices may be playing a role in the reduction in barometer sentiment as well as the recent drop in both the Index of Current Conditions and the Index of Future Expectations.

Read the full April Ag Economy Barometer report at https://purdue.ag/agbarometer. The report includes insights into producers’ year-over-year attitudes toward farmland values and a breakdown of the comparison between producers and futures market participants regarding the future direction of corn and soybean futures. The site also offers additional resources, such as past reports, charts and survey methodology, and a form to sign up for monthly barometer email updates and webinars. Each month Mintert also provides an in-depth analysis of the barometer. That video can be viewed at https://purdue.ag/barometervideo.