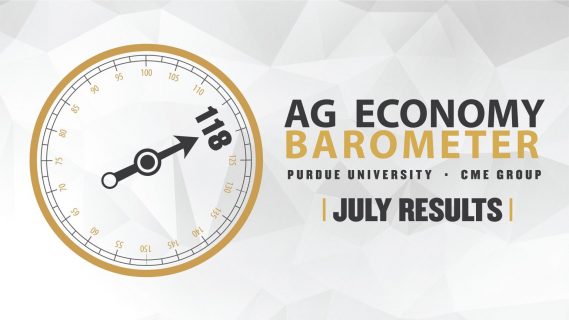 Farmer sentiment was virtually unchanged in July in comparison to a month earlier, according to the Purdue University/CME Group Ag Economy Barometer. The index rose just one point from June to a reading of 118, still 30% lower than in February before the pandemic began. The Ag Economy Barometer is based on responses from 400 U.S. agricultural producers. This month’s survey was conducted July 20-24.

Although there was little change in the July barometer, producers’ perspective on current versus future conditions shifted. The Index of Current Conditions rose 12 points from June to a reading of 111, and the Index of Future Expectations fell five points to a reading of 121. Unchanged from June but nine points lower than in May, 56% of producers reported they plan to reduce their farm machinery purchases compared with a year ago. Thirty-eight percent of producers reported they plan to keep machinery purchases about the same as last year, which also was unchanged from June but seven points higher than in May. The Farm Capital Investment Index also was unchanged from June, standing at a reading of 60, but noticeably stronger than May’s index reading of 50.

“Although overall farmer sentiment in July did not change much compared to June, sentiment was still much weaker than in February before the impact of coronavirus hit,” said James Mintert, the barometer’s principal investigator and director of Purdue University’s Center for Commercial Agriculture. “In July, farmers indicated they were a bit less concerned about the current economic situation on their farms than earlier this spring, but they are less optimistic about the future, perhaps as a result of the recent resurgence in COVID-19 cases. Still, two-thirds of producers responding to this month’s survey said they believe Congress should provide additional economic assistance to farmers in 2020 to help offset the pandemic’s impact on agriculture.”

Over half of the farmers responding to the July survey said they were less likely to attend in-person educational events in 2020 as a result of COVID-19 concerns. When asked what their top information source would be in lieu of attending in-person events, 36% chose farm magazines, 19% chose online webinars, 17% chose farm radio and 17% chose websites. Direct emails and podcasts were far less popular as a top information source with just 8% and 3% of producers choosing these options, respectively.

When asked about their short-term outlook for land values, farmers’ perspective improved, with 16% saying they expect farmland values to rise over the next 12 months compared with 10% back in June. However, when asked about farmland values in five years, farmers were somewhat less optimistic than they were in June, with 48% saying they expect values to rise over the next five years compared with 55% in the previous survey.

Read the full Ag Economy Barometer report at https://purdue.ag/agbarometer. This month’s report includes insight into how farmers are conducting business as a result of COVID-19 and producers’ use of marketing advisors to manage risk. The site also offers additional resources – such as past reports, charts and survey methodology – and a form to sign up for monthly barometer email updates and webinars. Each month, the Purdue Center for Commercial Agriculture provides a short video analysis of the barometer results, available at https://purdue.ag/barometervideo, and for even more information, check out the Purdue Commercial AgCast podcast. It includes a detailed breakdown of each month’s barometer, in addition to a discussion of recent agricultural news that impacts farmers. It is available now at https://purdue.ag/agcast.