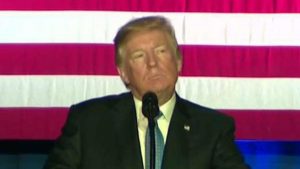 Tax reform is an important issue for farmers, so many were watching closely to see what the President proposed in his speech in Indianapolis on Wednesday. The President specifically mentioned farmers and the benefits of his reform plan to family farming operations. The reaction by most farm organizations was favorable.

Farm Bureau President Zippy Duvall said, in a statement, that AFBF was encouraged by the inclusion of lower tax rates for individuals who own businesses, elimination of the death tax, and some business interest deductibility. However, AFBF says any tax reform package should also include the continuation of cash accounting and like-kind exchanges, unlimited stepped-up basis, and lower capital gains taxes.

Meanwhile, the National Cattlemen’s Beef Association welcomed the tax plan, saying cattle producers are “very pleased” with the President’s plan. Craig Uden,President of NCBA, said, “Current provisions in the tax code that help livestock producers maintain economically viable businesses and support the success of future generations of farmers and ranchers must be preserved. Stepped-up basis, cash accounting, like-kind exchanges, cost recovery, and the deductibility of interest payments are just a handful of the provisions that allow agricultural producers to survive despite the many challenges we face, from market volatility and fluctuating input prices, to droughts, wildfires, and floods, to the challenge of generational transfers. We’ll closely monitor these provisions as more details on legislative language become available, and intend to fight tooth and nail for a tax code that supports America’s beef producers.”

Secretary of Agriculture Sonny Perdue applauded President Donald J. Trump’s vision of a broad reform of the American tax code, which will result in dramatic tax cuts for millions of American individuals, families, businesses, and family farmers, ranchers, and foresters. Secretary Perdue said in a statement, “The people of American agriculture work hard every day to provide food, fiber, and fuel for their fellow citizens, so they shouldn’t be overburdened by the tax collector as well. Most family farms operate as small businesses, with the line between success and failure frequently being razor thin. Add to that the complexity and costs of merely complying with the tax code, and their budgets are stretched even tighter. On top of it all, the unfair ‘Death Tax’ can cause too many family farms to be broken up and sold off to pay the tax bill, undoing lifetimes of toil and preventing further generations from carrying on. President Trump is right to push for reform and reductions in the tax code—an overhaul that is long overdue.”